Dramatic weather plays a significant role in the work of Regionalist artist John Steuart Curry (1897-1946) and often serves as a symbol of menace relating to farm life and world crises. Less recognized is the significance of another natural event in Curry’s oeuvre—the sunrise. Whether part of an ensemble in a mural or as a main character in an easel painting, the sunrise can stand in for poetic ideals, positive historical change, and even the artist’s own optimism.

This in-person and virtual exhibition explores Curry’s depiction of sunrise in paintings, prints, drawings, and book illustrations. The exhibition pays particular tribute to the artist’s 1935 painting Sunrise over Kansas, purchased from his second wife, Kathleen Curry, in 1996 with support from the Friends of the Beach Museum of Art. Because of distracting discoloration of the sun—caused by Curry’s mid-1930s experiments mixing materials—the painting has not been on display for many years.

The exhibition is accompanied by a video about the materials analysis and conservation of Sunrise over Kansas. Kenneth Bé of the Gerald R. Ford Conservation Center in Omaha, Nebraska, has treated the painting to help bring back its sun’s intended impact. Bé was a consultant to the exhibition, which has been developed by Curator Elizabeth Seaton with assistance from student curatorial assistant Abby Lynn.

Sunrise (Sunrise over Kansas)
1935
Mixed-media on canvas
Friends of the Beach Museum of Art purchase, 1996.18

In Sunrise over Kansas, Curry presents an emerging sun spreading its light across the rolling hills and red soil of Heart Ranch in Barber County, Kansas. In the foreground, a coyote brings food to its young.

Curry’s mid-1930s experiments mixing resins and oil-based materials caused the center of the sunrise to become discolored over time. Recent conservation of the affected area has helped show how Curry sought to capture the sun’s brightness using a subtle blend of white, yellow, and pink.

Sunrise (Sunrise over Kansas)
1935
Mixed-media on canvas
Friends of the Beach Museum of Art purchase, 1996.18

Scroll left and right to see Sunrise over Kansas before and after treatment. In 1935 Curry used layers of oil paint and natural resins typically used to varnish a painting’s surface to increase the luminosity of the sun’s center. The experimental mixing produced the opposite effect, and the area darkened over time. Careful inpainting with water-based colors by an art conservator in the mid-2010s reduced the discoloration and integrated the area into the larger design. 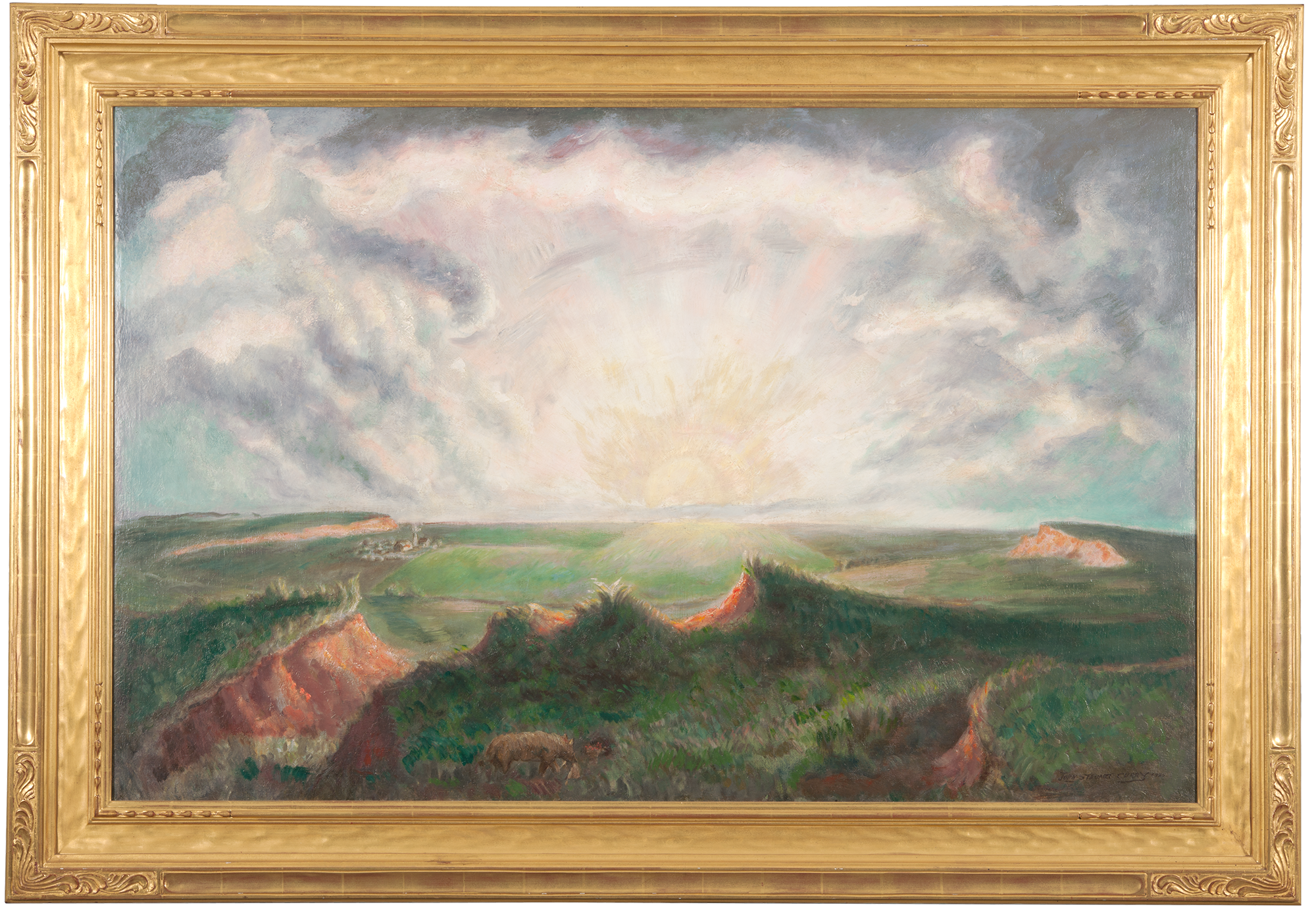 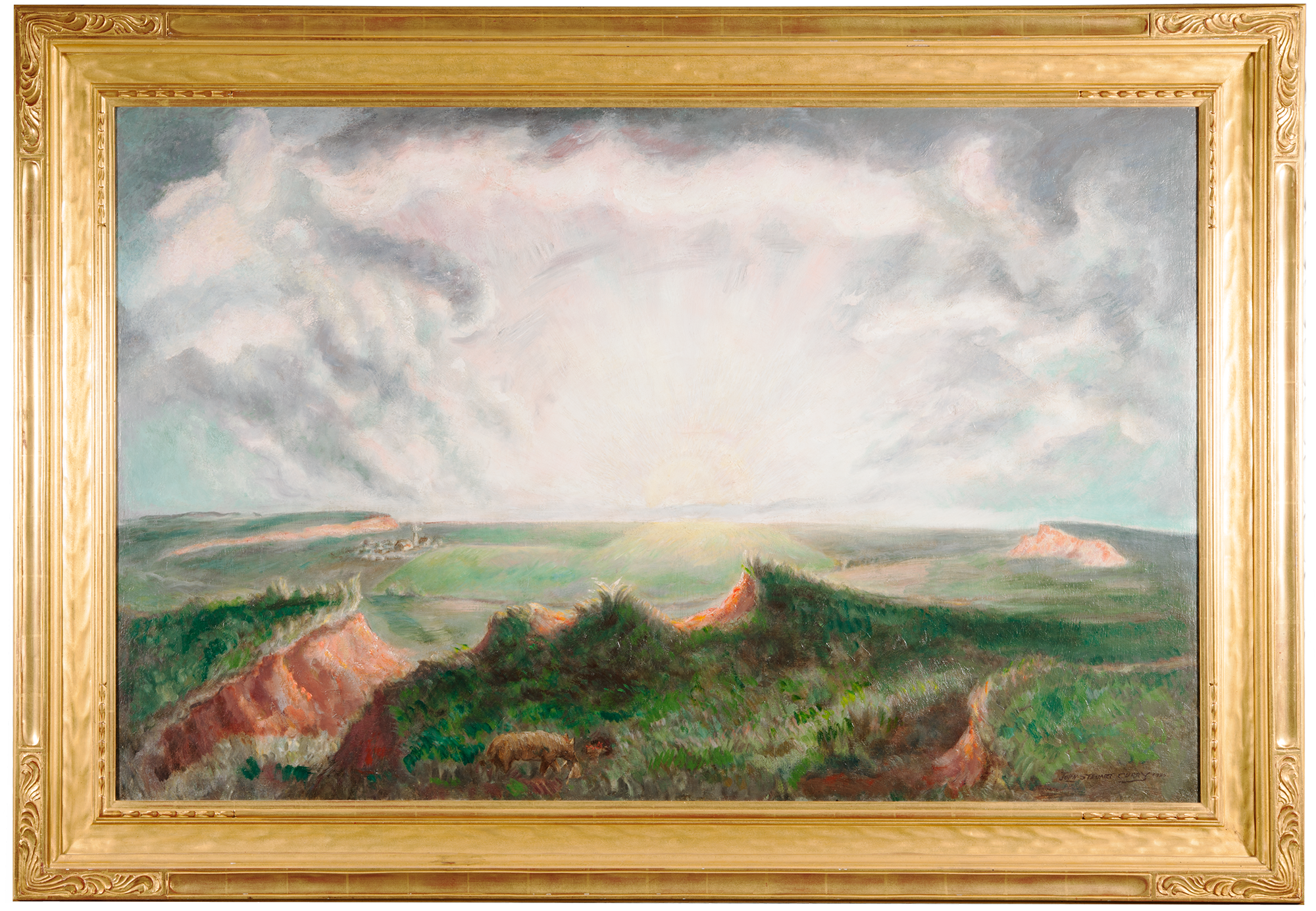 Curry’s Sunrise over Kansas was one of several sunrise views the artist created during the mid- 1930s. His focus on the subject coincided with improvements in the country as well as his personal life. The Franklin D. Roosevelt administration’s New Deal programs were bringing hope to Americans whose lives had been devastated by the Great Depression. Curry was also falling in love with Kathleen Gould, pictured here; they would marry in 1934. The artist’s first marriage to Clara Derrick Curry, who died in 1932, had been strained.

Biographer Laurence Schmeckebier identifies these events as probable influences on Curry’s decision to embark on a sunrise series. About the artist’s personal contentment, he wrote in 1943, “It is … not too much to assume that the happiness he experienced … as a result of his friendship and subsequent marriage with Kathleen Gould may have had much to do with the boyish enthusiasm of the sunrise pictures.”

Kathleen Curry (1899–2001) became an ardent advocate for her husband. The Beach Museum of Art received a bequest from her estate in 2002 that included some 900 drawings, paintings, and prints, and established the museum as one of the largest repositories of Curry’s art. 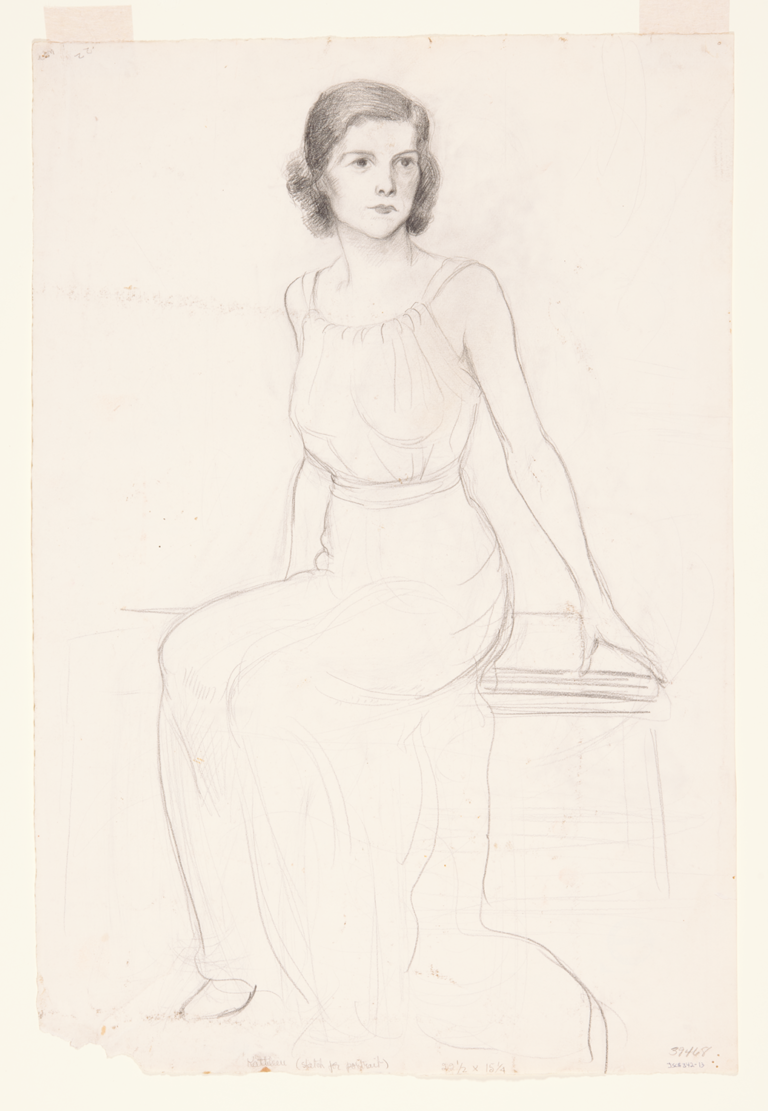 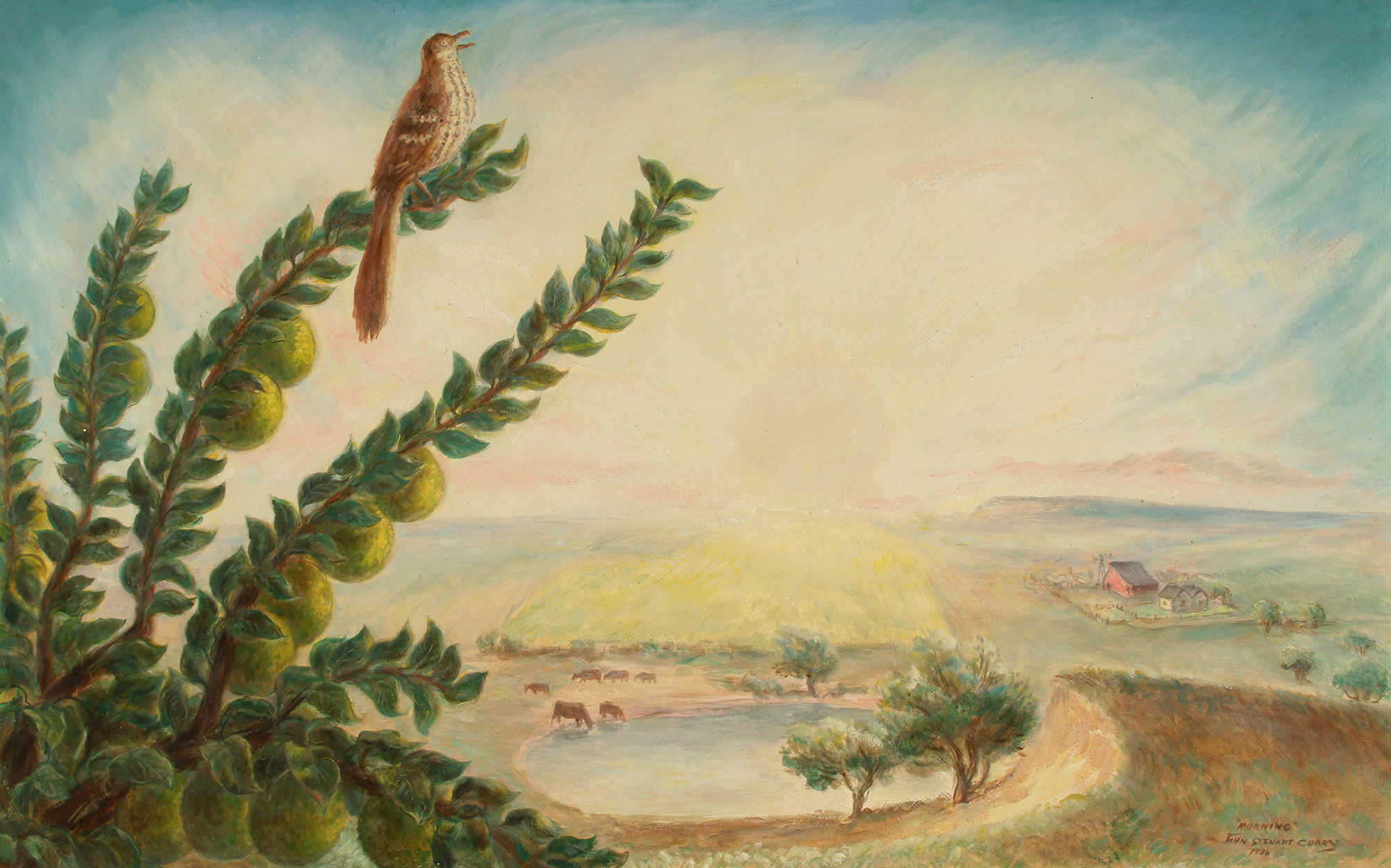 In this snowy scene, Curry attempts to capture a meteorological and optical event in which ice crystals suspended in the earth’s atmosphere refract sunlight and make it appear as if two suns are on each side of the actual sun. The effect is often referred to as “sun dogs.” The painting’s subject is unusual and evidence of the artist’s early interest in exploring the effects of sunlight. The setting is the same Heart Ranch pictured in Sunrise over Kansas.

Sun Dogs
1930
Oil on canvas
Acquisition made possible with funds provided by K-State students, faculty, and members of the Manhattan community, 1933.3 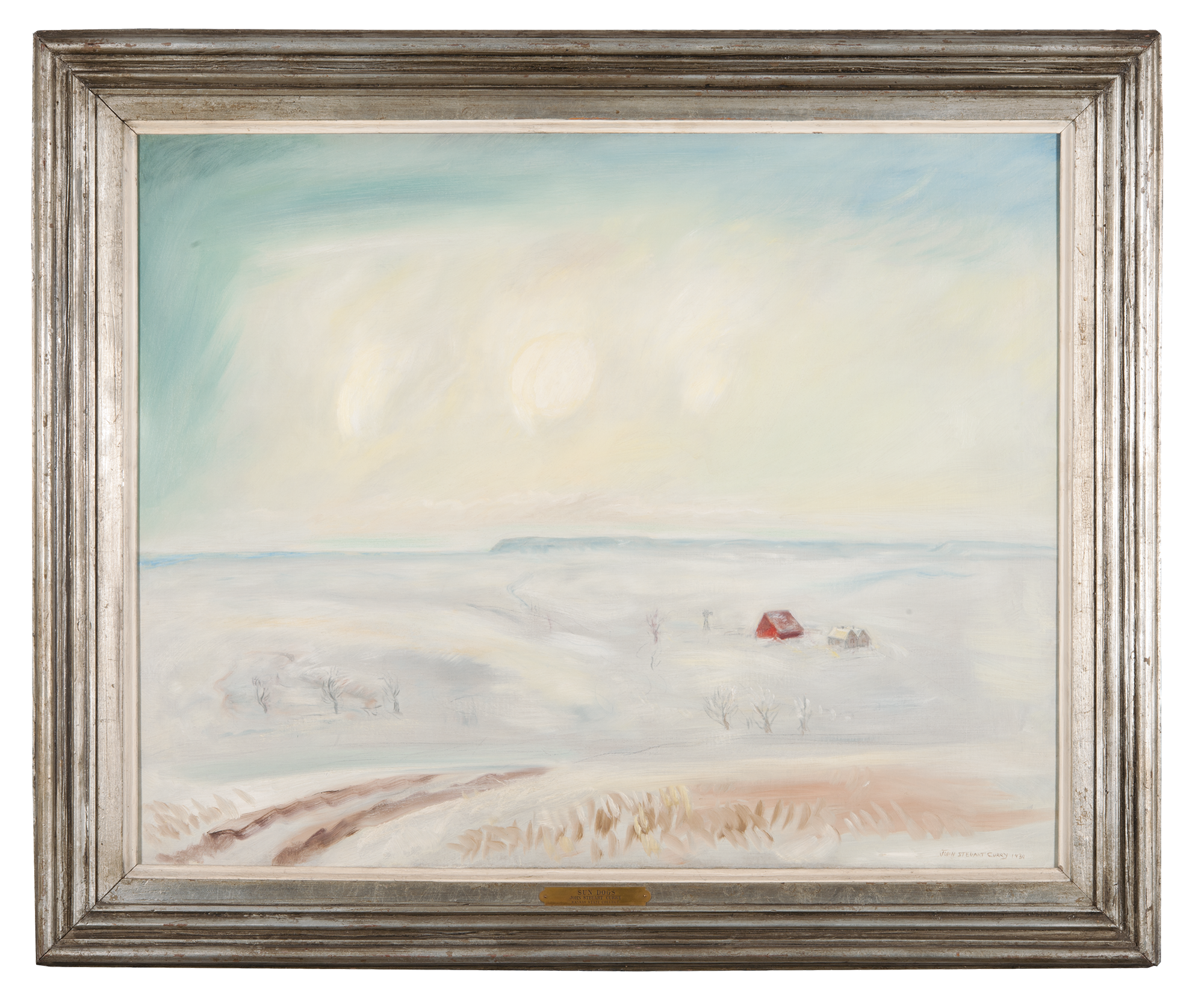 In 1940, Curry was invited to illustrate an edition of James Fenimore Cooper’s 1827 tale about a group of white settlers traveling across the Great Plains. He developed a landscape featuring a prominent sunrise for the book’s cover and frontispiece.

The images may have been inspired by a passage in the book in which the beleaguered travelers, led by trapper Natty Bumppo, awaken to first light. One of them exclaims, “Surely it contains a promise of happier times,” to which another replies, “Glorious and heavenly is that streak of vivid red, and here is a still brighter crimson; rarely have I seen a richer rising of the sun.” 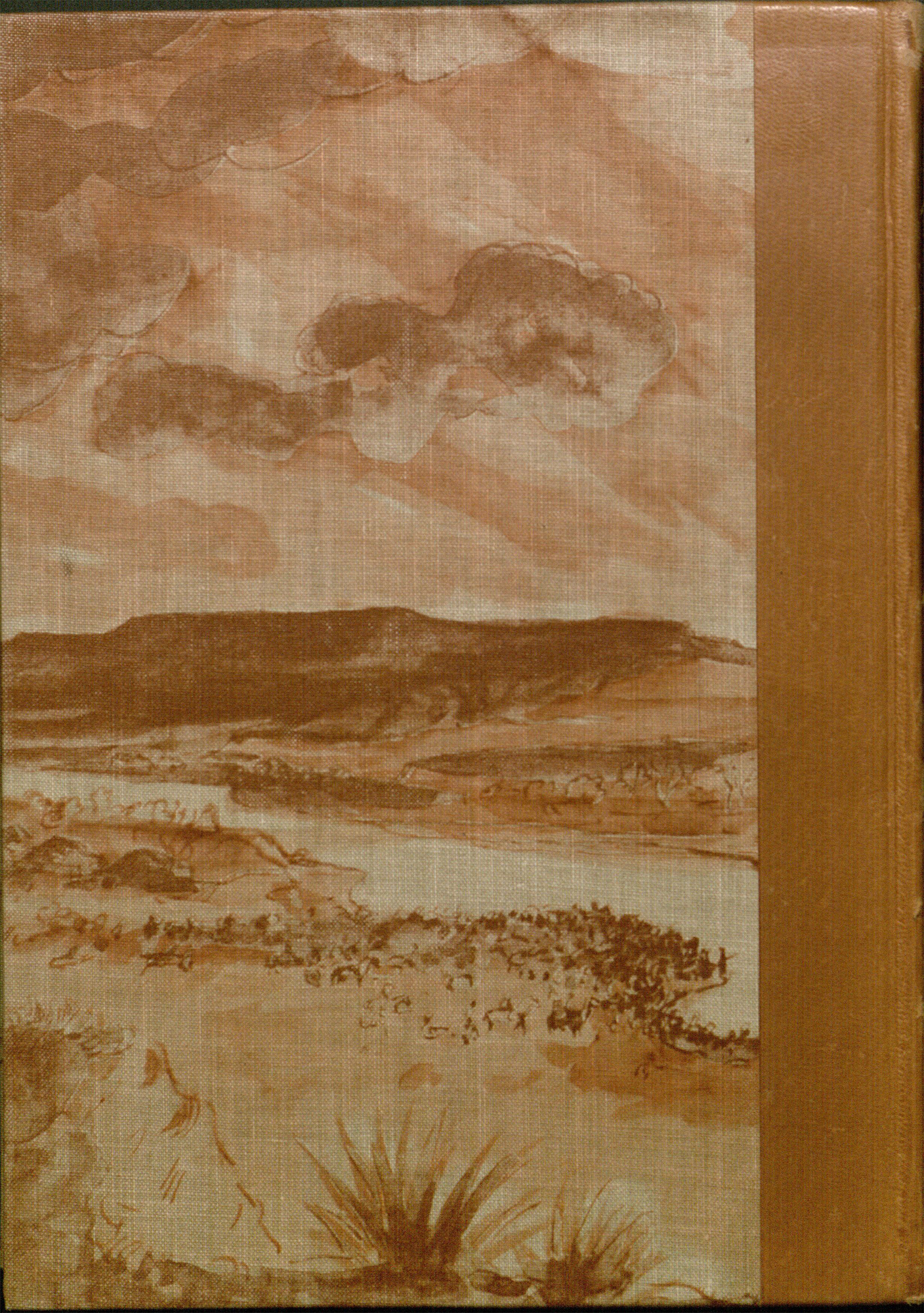 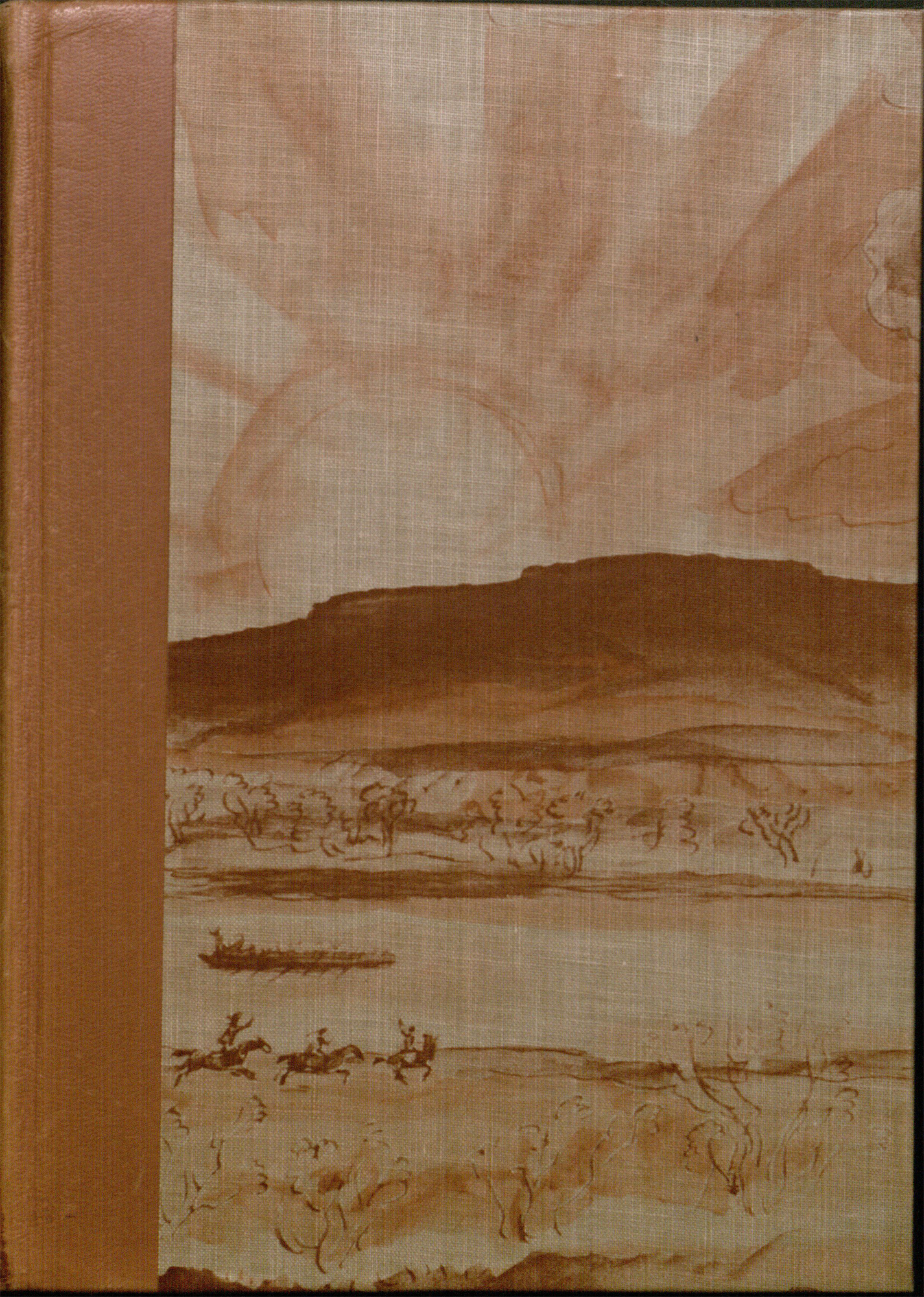 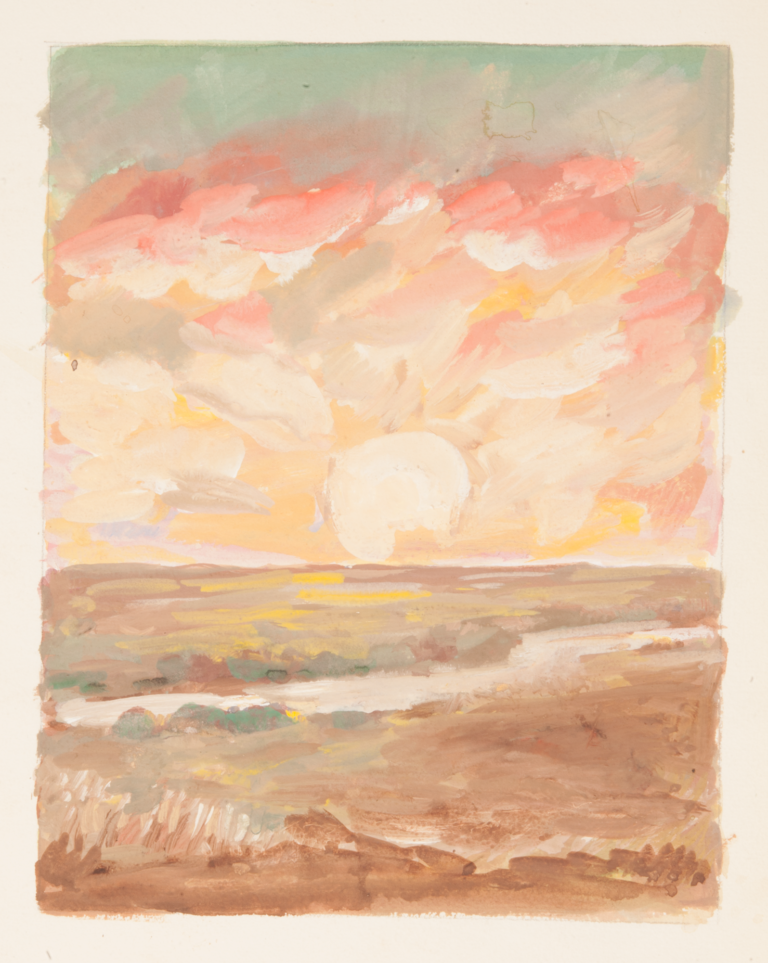 Curry produced several studies for the sunrise images he created to accompany James Fenimore Cooper’s story. Each shows a sun rising over a waterway, but the artist’s depiction of the topography is quite varied. The land in a gouache study appears marsh-like with its muddy colors and flat horizon. The final frontispiece design resembles Barber County in south-central Kansas, known for its mesas and red soils. The sunrise scene on the book’s cover shows clear similarities to the desert and mountain terrain near Scottsdale, Arizona, where Curry’s parents had a second farm. 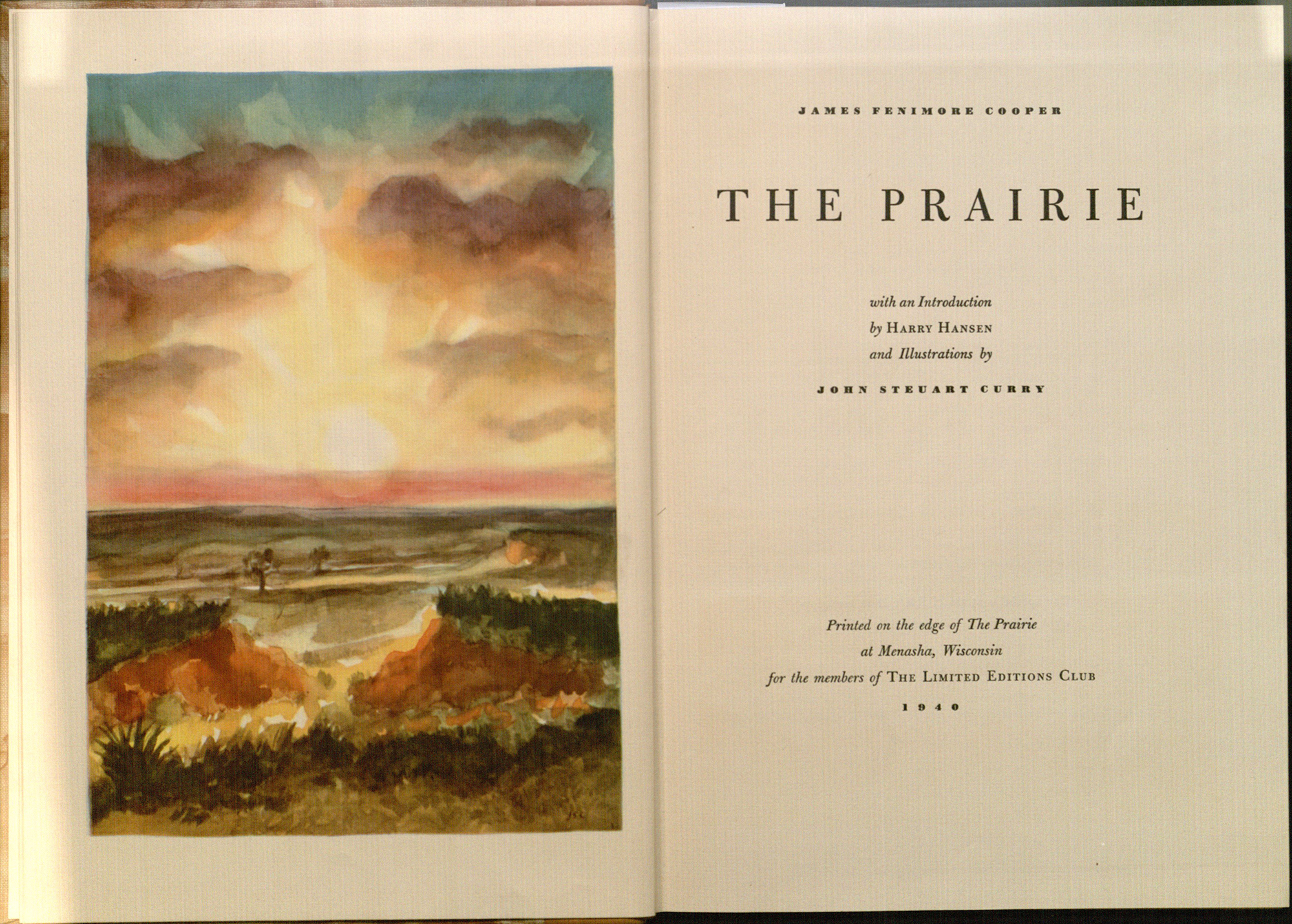 “In many ways the sunrise theme is another form of artistic self-portrait,” biographer Laurence Schmeckebier said in his 1943 book on Curry. “[I]t has become his common practice good-naturedly to add a rough sketch of a sunrise over his signature whenever anyone asks for his autograph.” 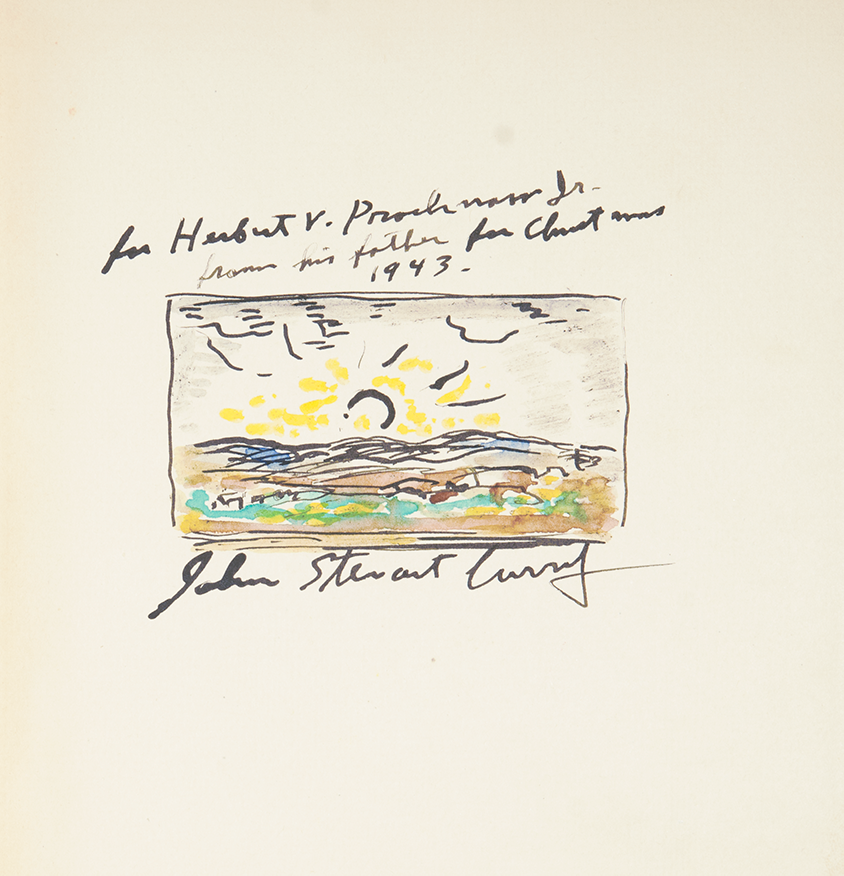 On first examination the sun in this image might be understood to be setting because it accompanies an image of President Abraham Lincoln lying in state after his 1865 assassination. But the figure of liberty hovering above the president and the soldiers marching on the horizon make it possible to consider this a rising sun—a symbol of freedom for many black Americans following Lincoln’s 1863 Emancipation Proclamation and a symbol of renewal after a civil war that left some 700,000 dead.

Curry created the drawing for an edition of Walt Whitman’s book of poems, Leaves of Grass, and while it does not appear to be related to a specific verse, the image evokes the same mixture of sadness and hope in several of Whitman’s poems about  Lincoln’s death, including “O Captain! My Captain!” The narrator in this poem describes the death of a captain who has led his ship, a symbol of the nation, back to safe anchor after its “fearful trip,” an allusion to the Civil War. 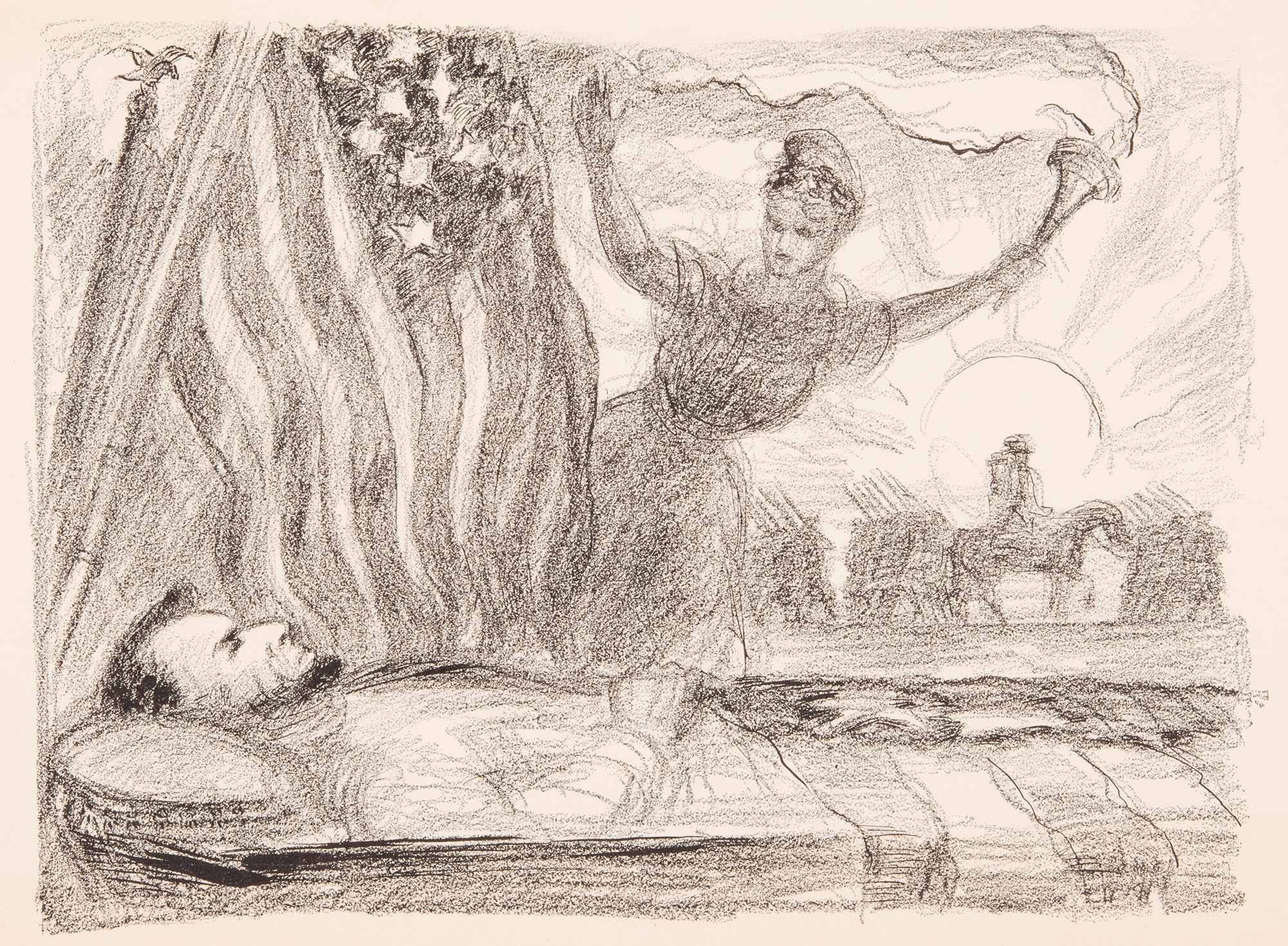 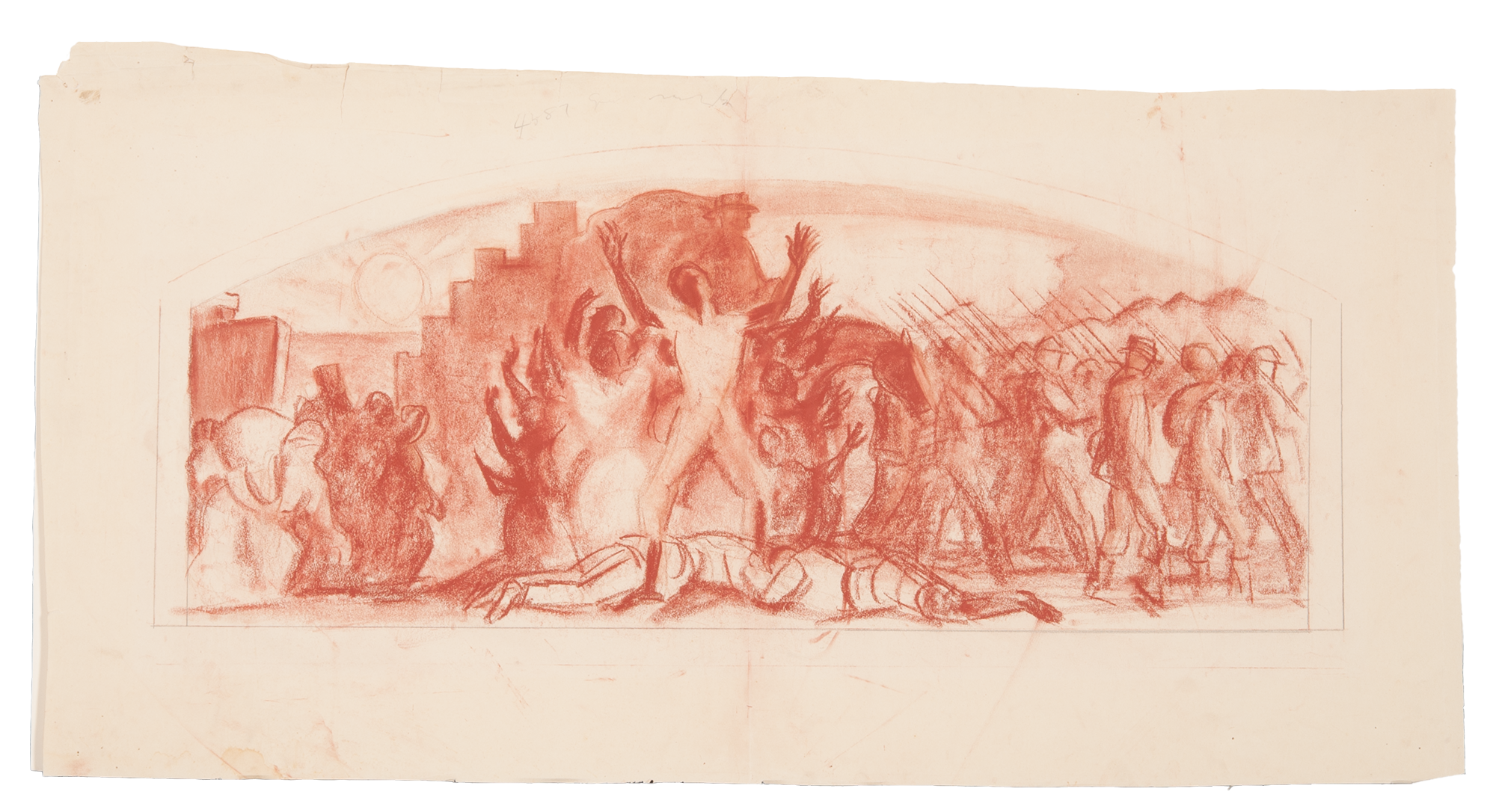 In Curry’s drawing for a proposed mural for the new US Justice Department Building in Washington DC, the sunrise is a symbol of renewal and hope for disembarking immigrants from Europe and slaves freed after the Civil War. Government administrators worried that black organizations would object to the central figures’ “hallelujah!” poses, so the design and others like it were rejected, and another subject was chosen for the final mural.

Curry later developed a version of Freeing of the Slaves as a mural for the University of Wisconsin law school library. In the mural, the artist moved the sunrise to the right and filled the left edge of the image with lightning-pierced clouds similar to those in his painting The Light of the World (below). The storm of oppression becomes the sunrise of hope for the mural’s slaves celebrating their emancipation.

A tornado chases a farm family and its animals into an underground shelter, something Curry had experienced while growing up on his parents’ farm near Dunavant, Kansas. The 1930 painting on which this lithograph is based was not well received by Kansans who perceived it as stereotyping the state.

Despite this, Curry used the tornado in other Kansas scenes, including his depiction of abolitionist John Brown in the Kansas statehouse, where the cyclone’s presence alludes to fanaticism and impending civil war. Art historian Henry Adams observes that the cyclone in Tornado may also symbolize the 1929 stock market crash.

The Tornado
1932
Lithograph
Gift of Ann Thackrey Berry, in honor of the late Russell I. Thackrey 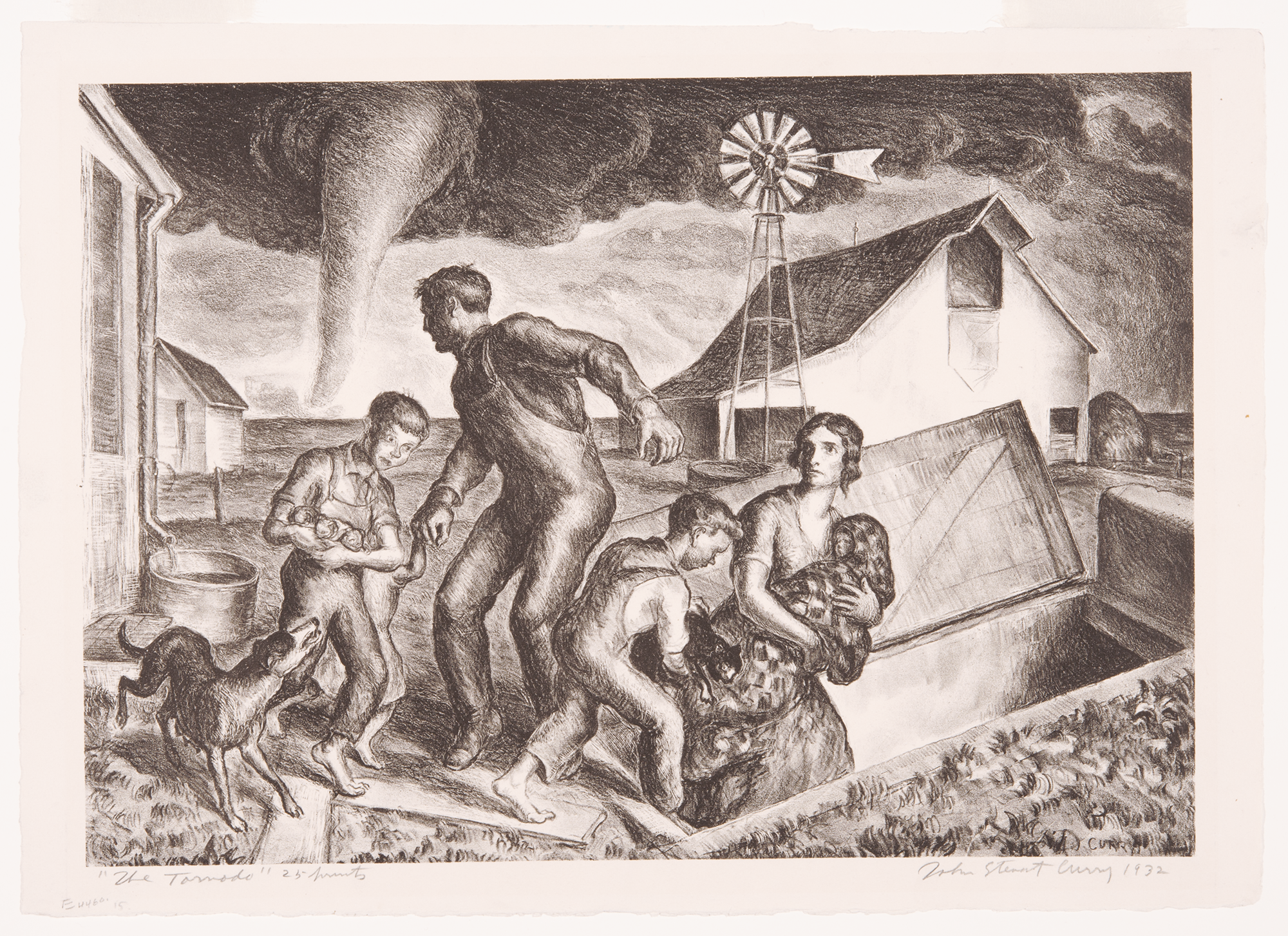 Curry’s reputation as a painter of “natural disturbances” prompted Esquire magazine editors to ask him in 1941 to create an image for the magazine that might serve as “a personification of this moment of our world-in-storm.”

The artist’s response was an elongated scene showing a crowd of men, women, and children facing a menacing storm arriving from the east. A red line divides water and clouds and is as suggestive of a sunrise as of the bloody violence of a world war across the Atlantic.

The work was published as a four-page gatefold just weeks before the bombing of Pearl Harbor on December 7, 1941.

A sunrise and sunset act as bookends and symbols of passing time in Curry murals for the Kansas State Capitol in Topeka. In one wing of the capitol, the artist presents figures who played a part in the state’s early history, including abolitionist John Brown and an anonymous, leather-clad frontiersman with a dead bison at his feet.

A herd of bison stampedes behind the frontiersman in this related print; the dust they produce threatens to obscure a prominent sun. The sun is presumed to be rising, because of its placement in the capitol’s eastern wing and because the artist confirmed that its companion in a mural in the western wing is setting. The descending sun casts its glow over cultivated lands and cattle, which have replaced the region’s native bison. 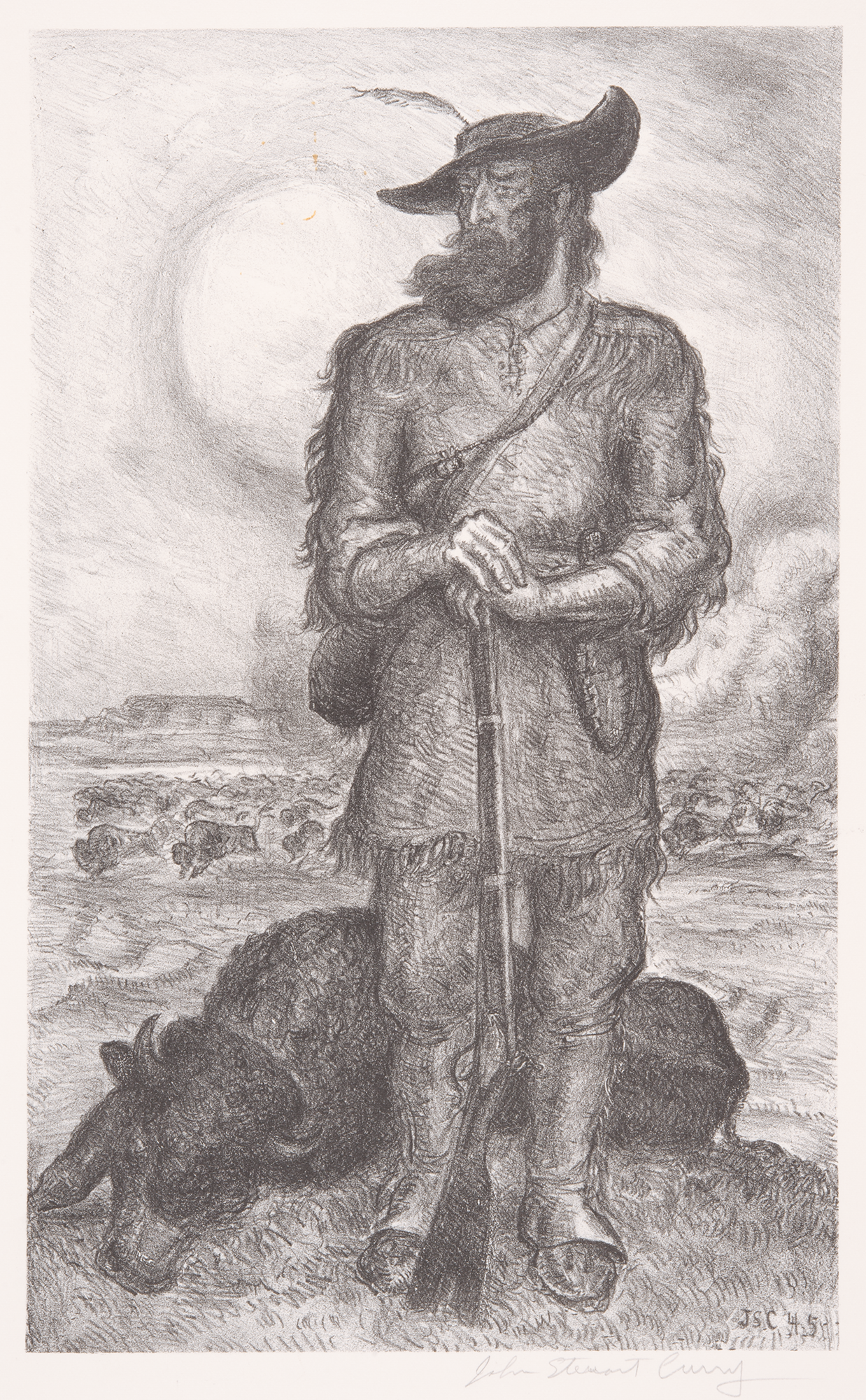 Curry created thirty-five illustrations for an edition of The Essays of Ralph Waldo Emerson released in 1944 by Illustrated Modern Library. The cover of the volume is remarkable in the way it refers to Emerson’s idea that Nature can provide insight and knowledge. Rays of sun pass through a grove at an angle, signaling a sun that is rising or falling. From whichever direction it flows, the sunlight here can be understood as enlightenment.

The sun in this illustration is large and intense, casting a warm tone over a cityscape and farmland. A male figure holds an old-fashioned plow pulled by two winged horses.

In the accompanying essay, Emerson grapples with notions of fate and freedom. He concludes that one should recognize both as equal influences in human life. Curry may have intended his winged horses to serve as symbols of fate pulling man forward. Yet this man carries a crop, which might be Curry’s way of signaling that individuals have the ability to steer their own course. 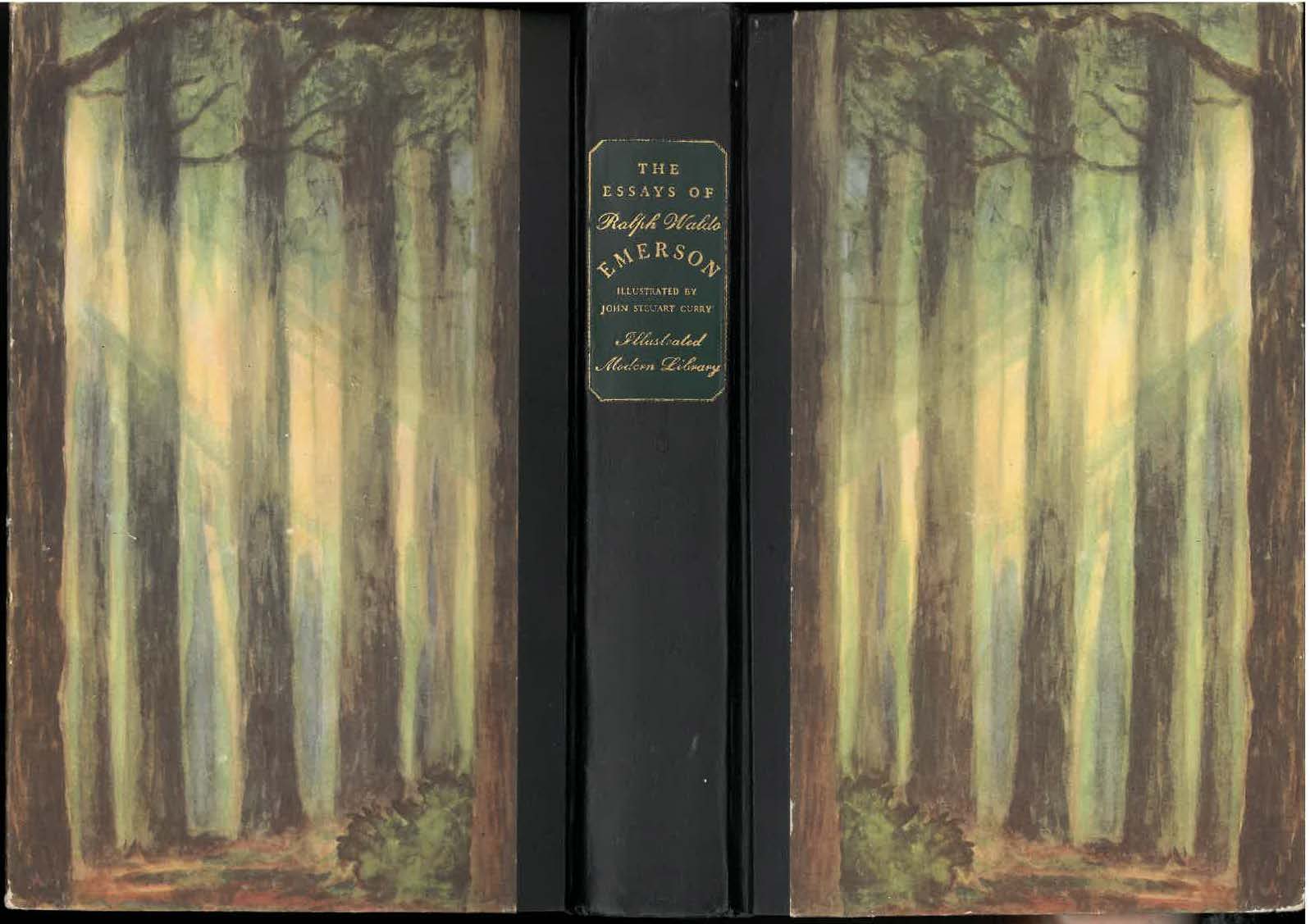 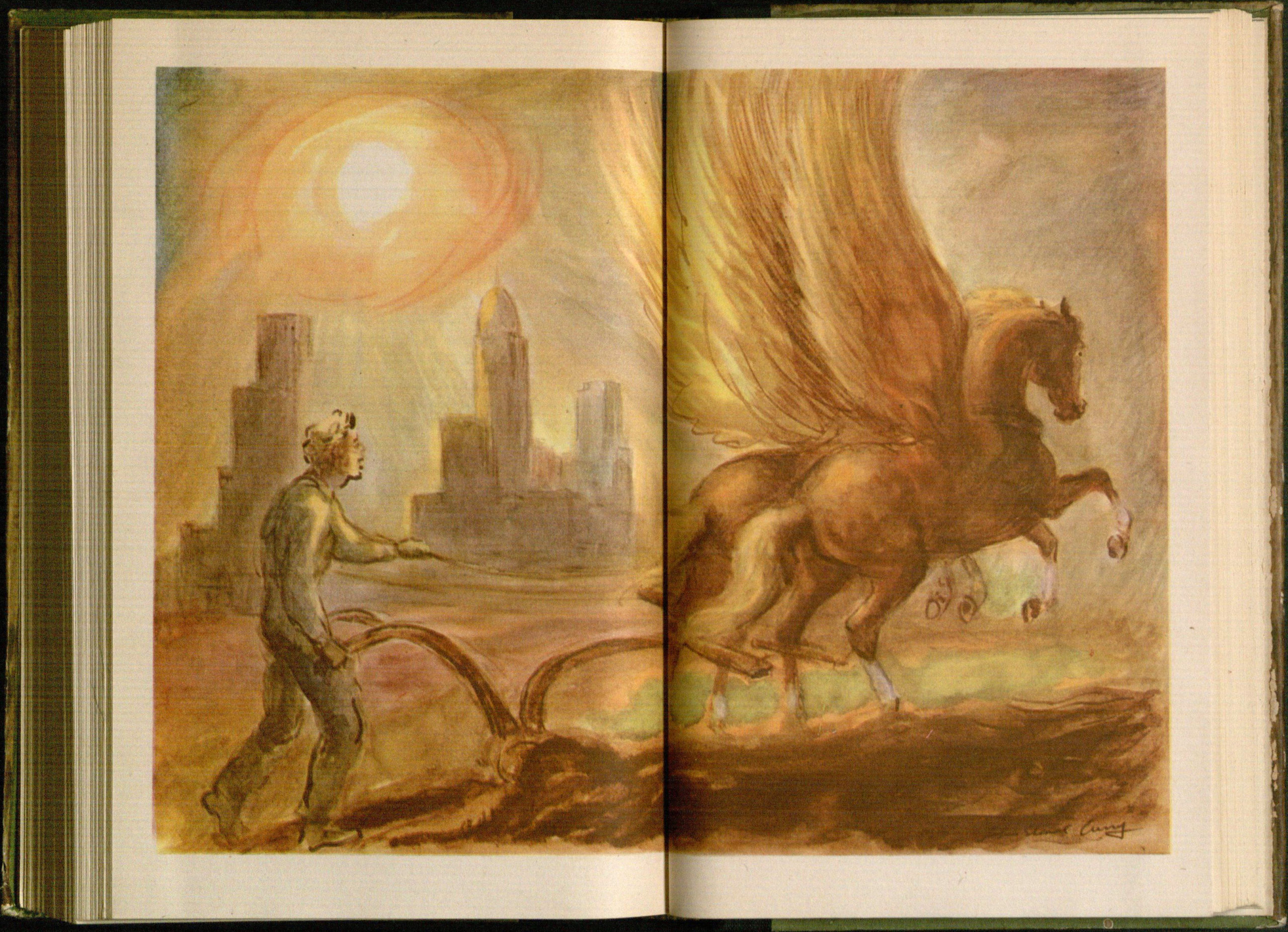 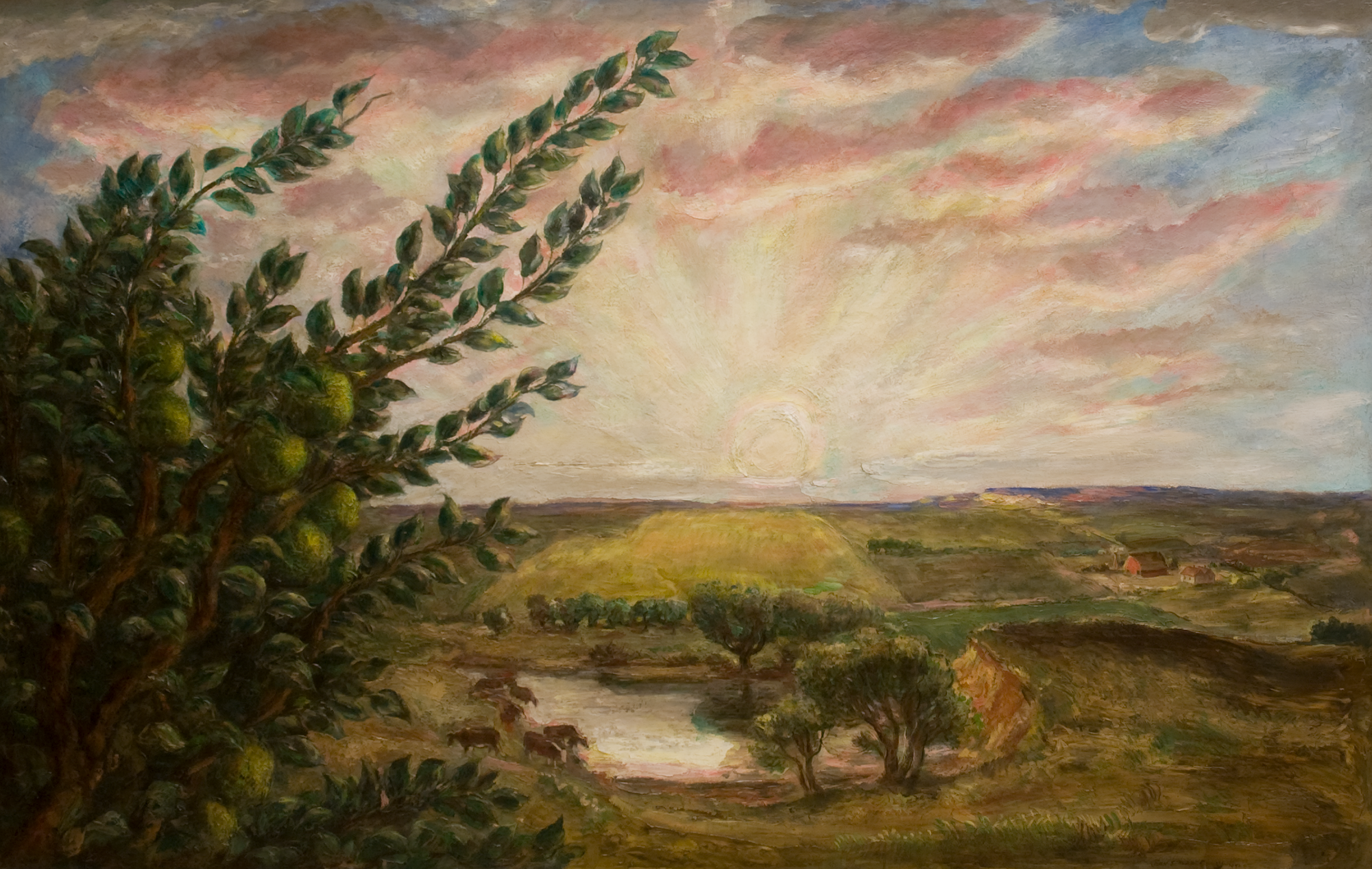 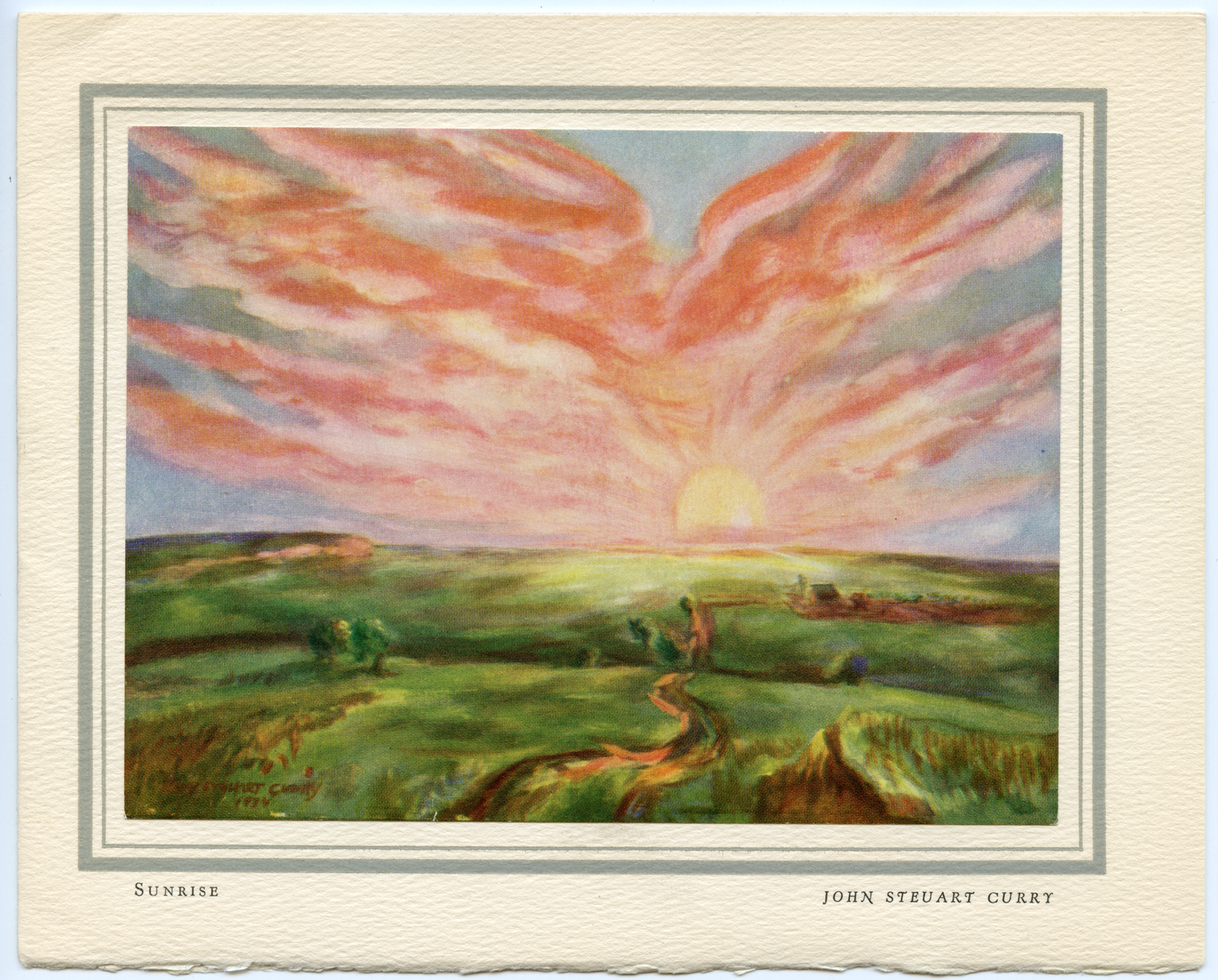 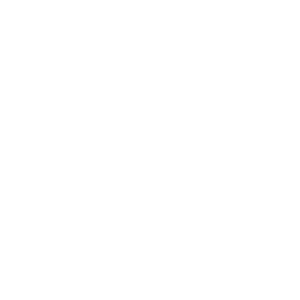 To learn more about the museums’s collection, download the Smartify app for free.