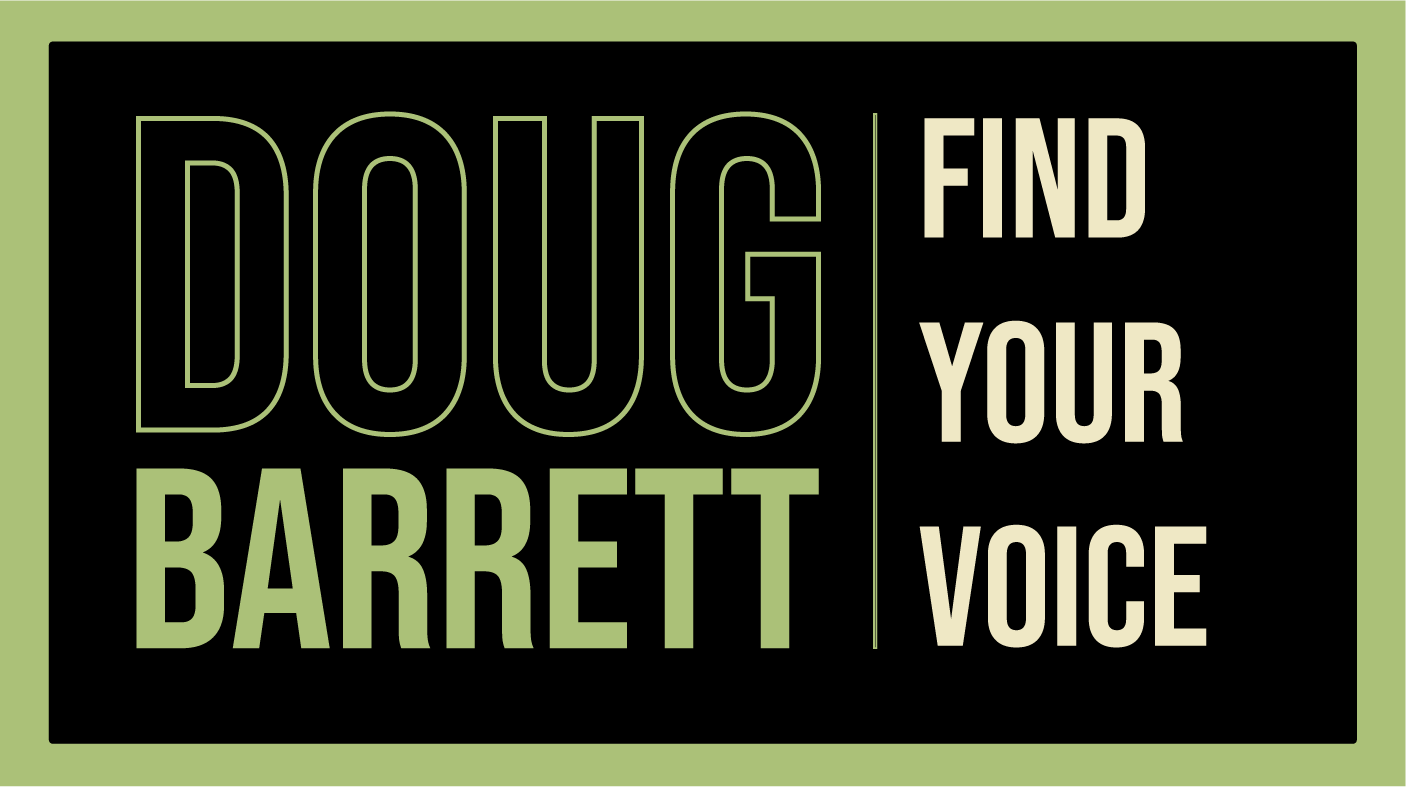 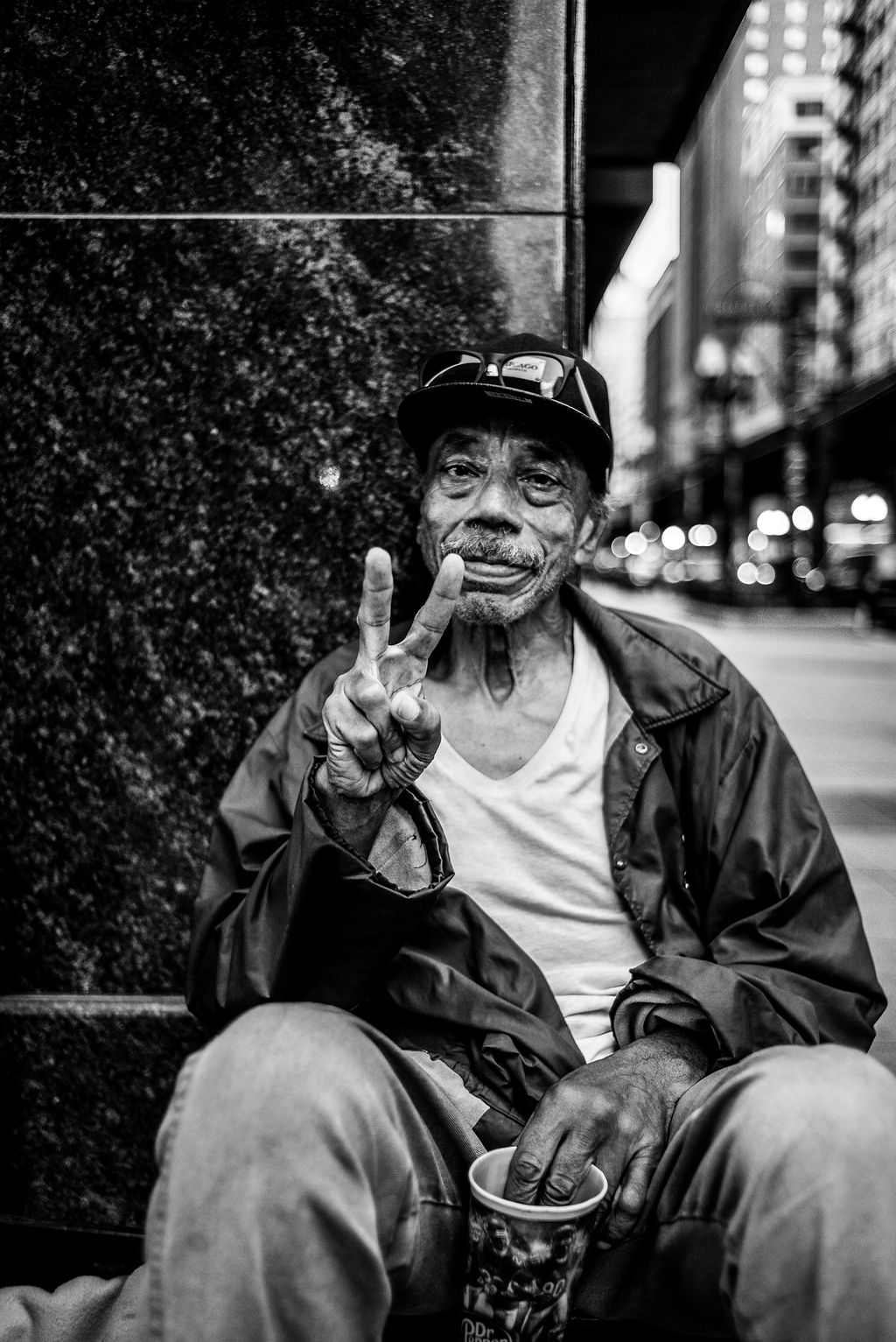 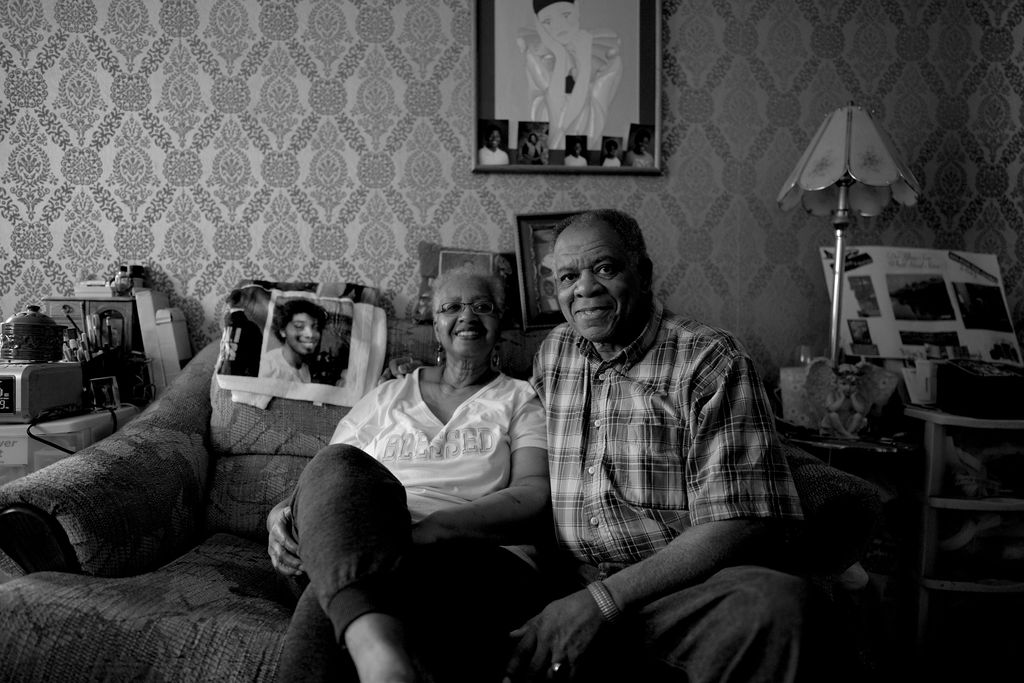 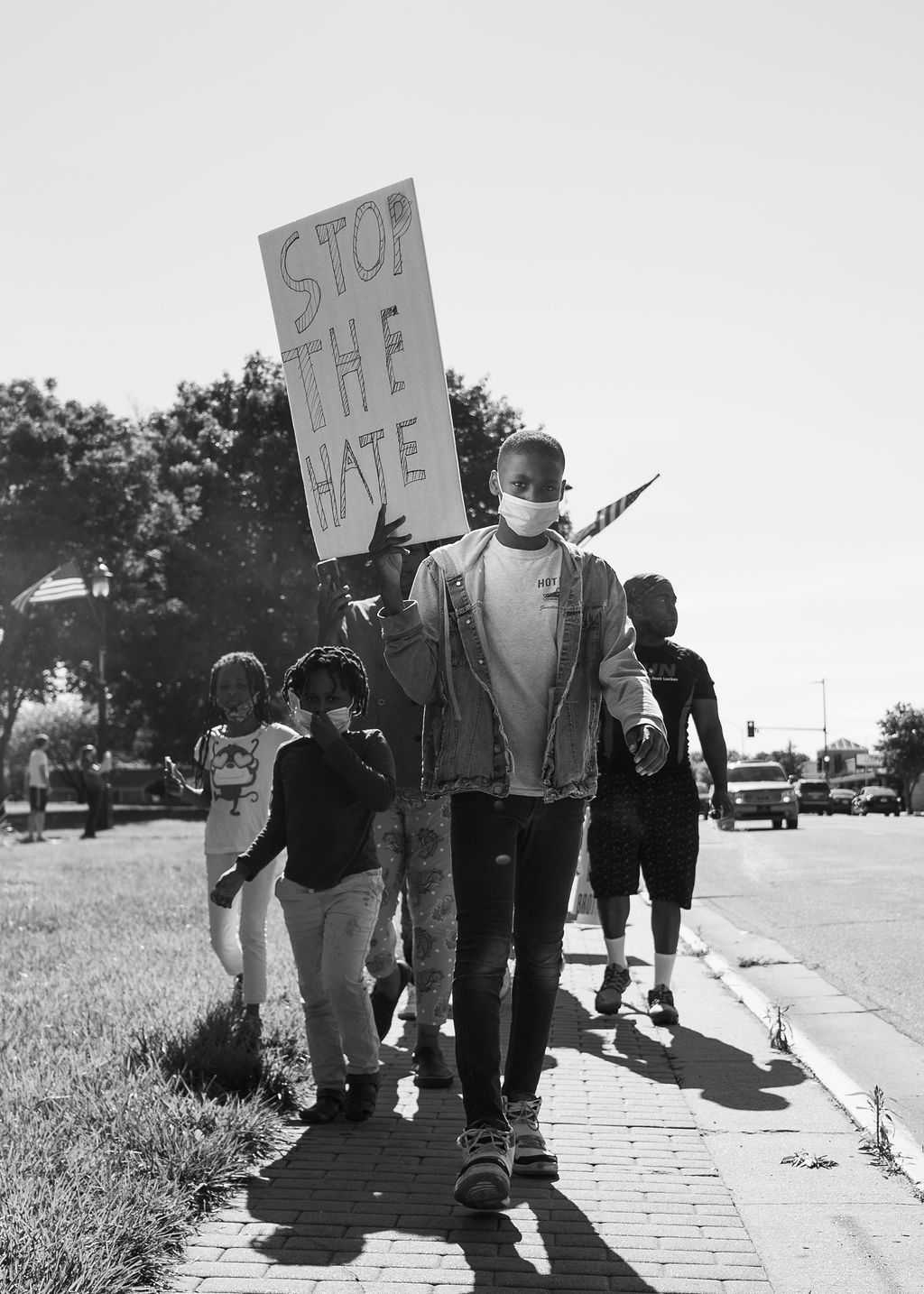 A post Doug Barrett created on Instagram on June 10, 2020, epitomizes the unique and powerful perspective he brings to photography. Showing images of the backs of people’s heads at Black Lives Matter protests, he wrote: “Black is beautiful. We are a people rich in love and kindness. Sometimes it’s said our hair is nappy. We call it natural. It’s not a threat. … Stop letting our skin and hair scare you. … Yes, our hair may have a texture; yes, it may be coarse or may even be styled differently. … We are humans. It shouldn’t matter what we look like. We’re not a threat.”

Authenticity shines in all three series of photographs featured in this exhibition. In their own way, they seem to continue an intention Gordon Parks pursued a generation ago, to tell compelling stories about what it is like to be African American. Barrett is the author of both the images and the texts accompanying them.

Generous support for this project provided by:

To learn more about the museum’s collection, download the Smartify app for free.

The Marianna Kistler Beach Museum of Art is grateful to The Alms Group for creating this and other 3D Virtual Tours for our exhibitions.

We were trained to be invincible. 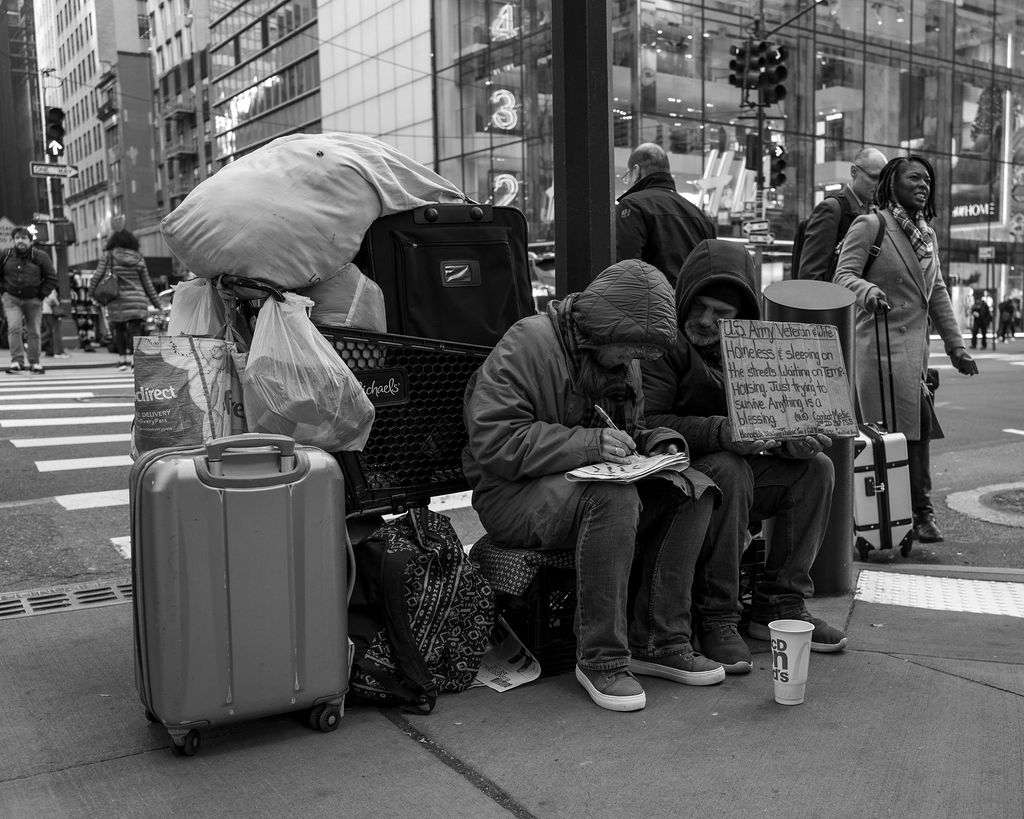 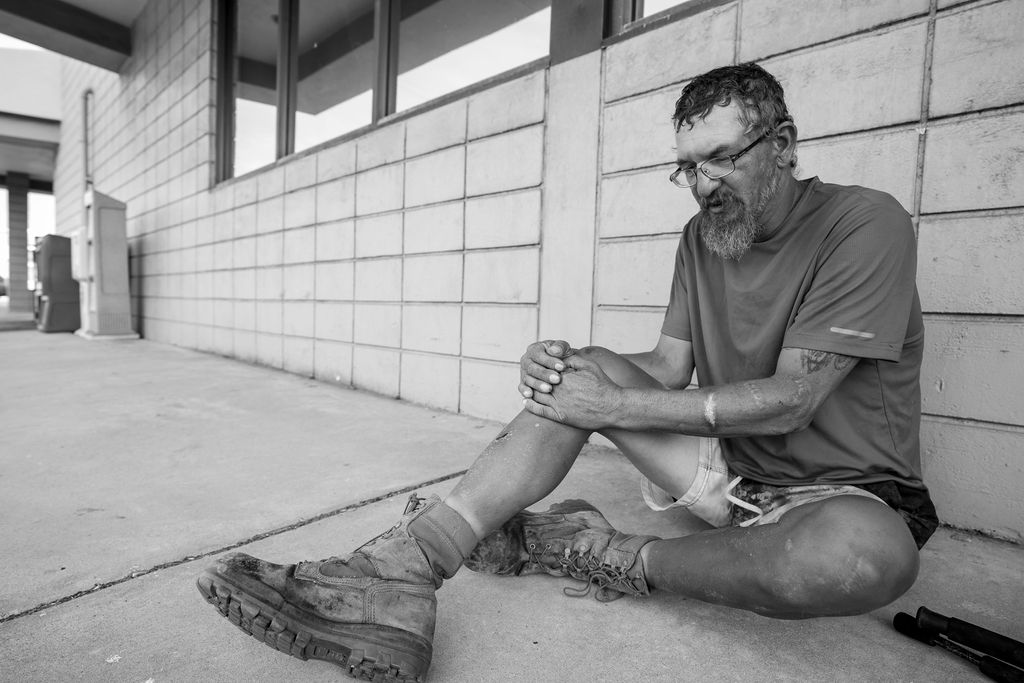 What I’ve experienced only through history books, you’ve lived through. 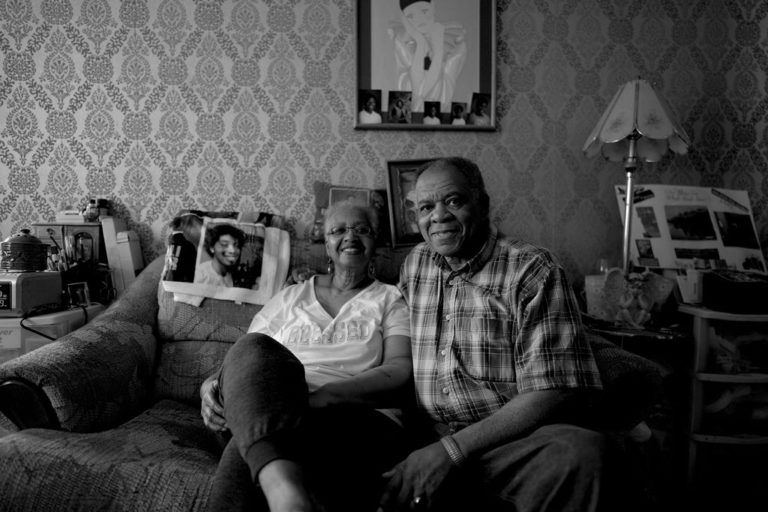 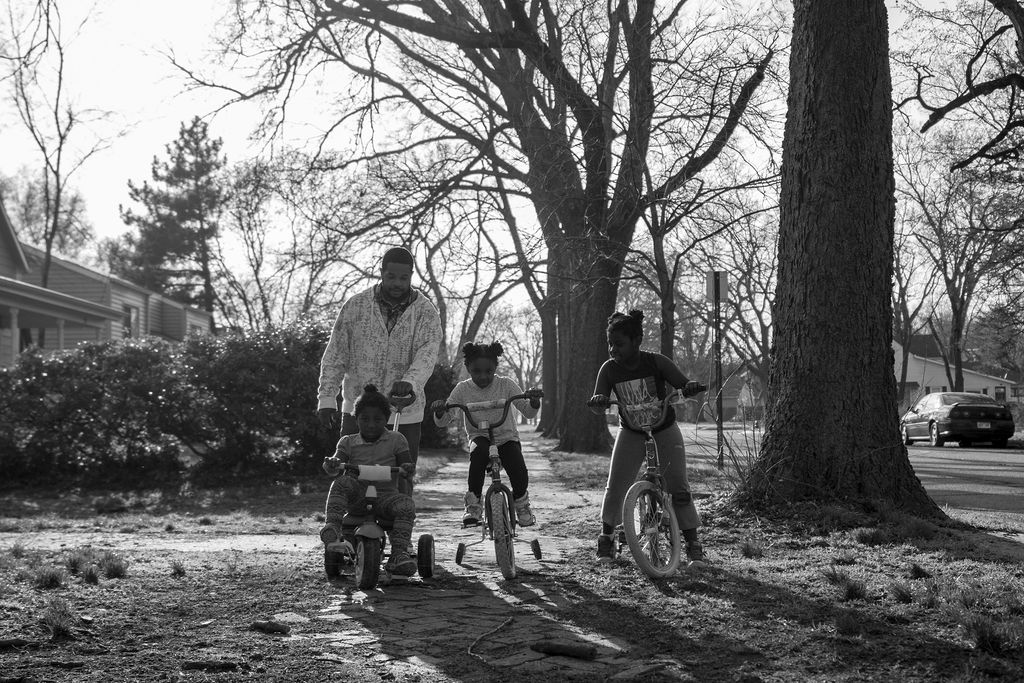 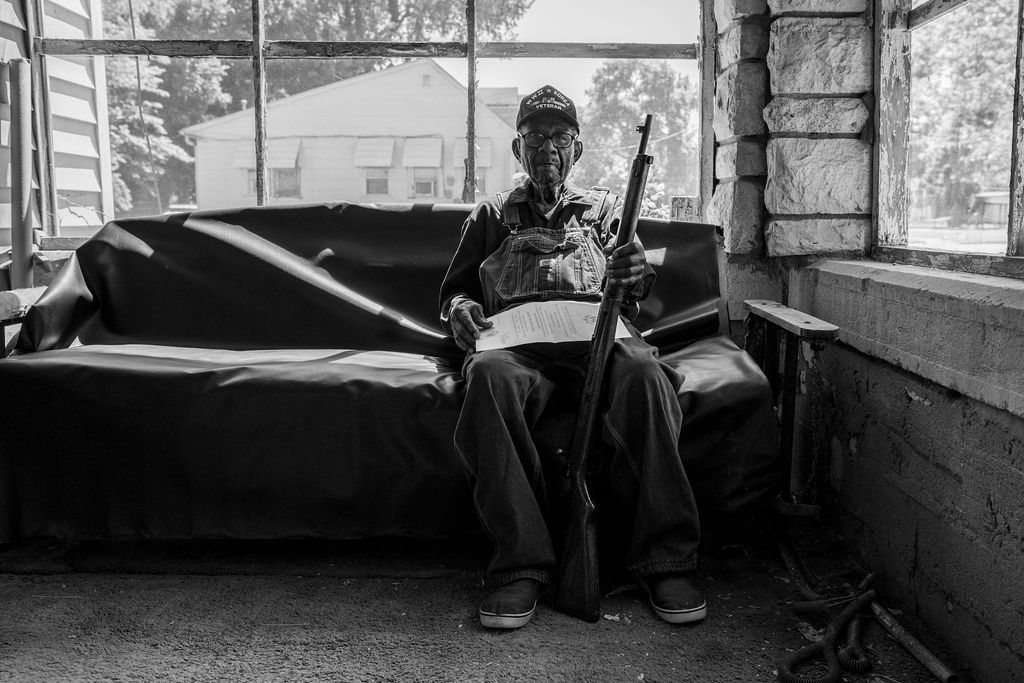 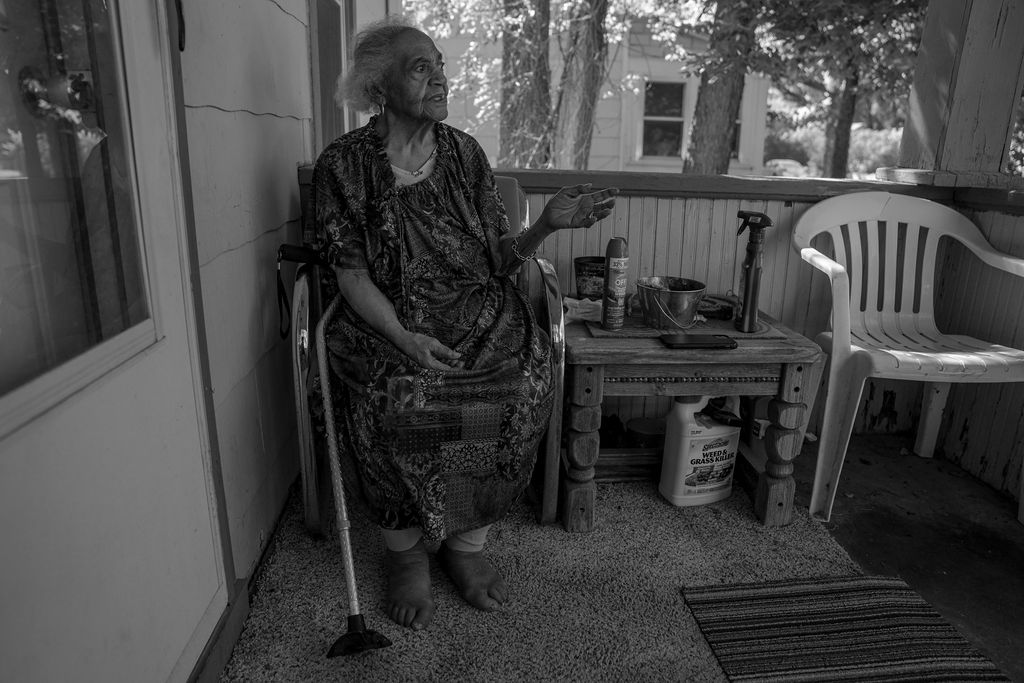 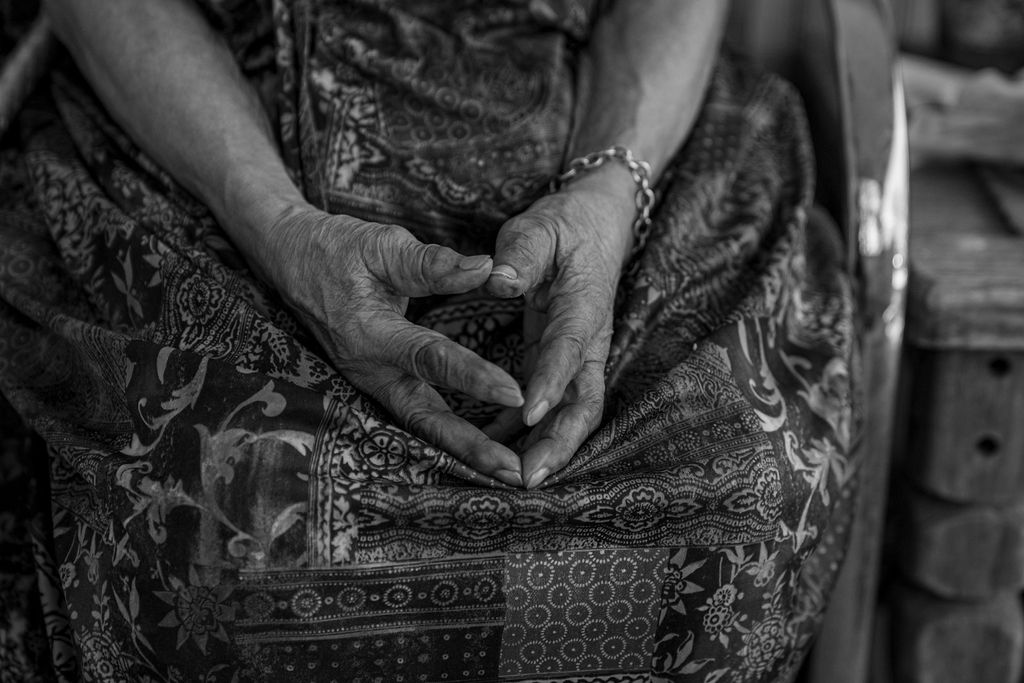 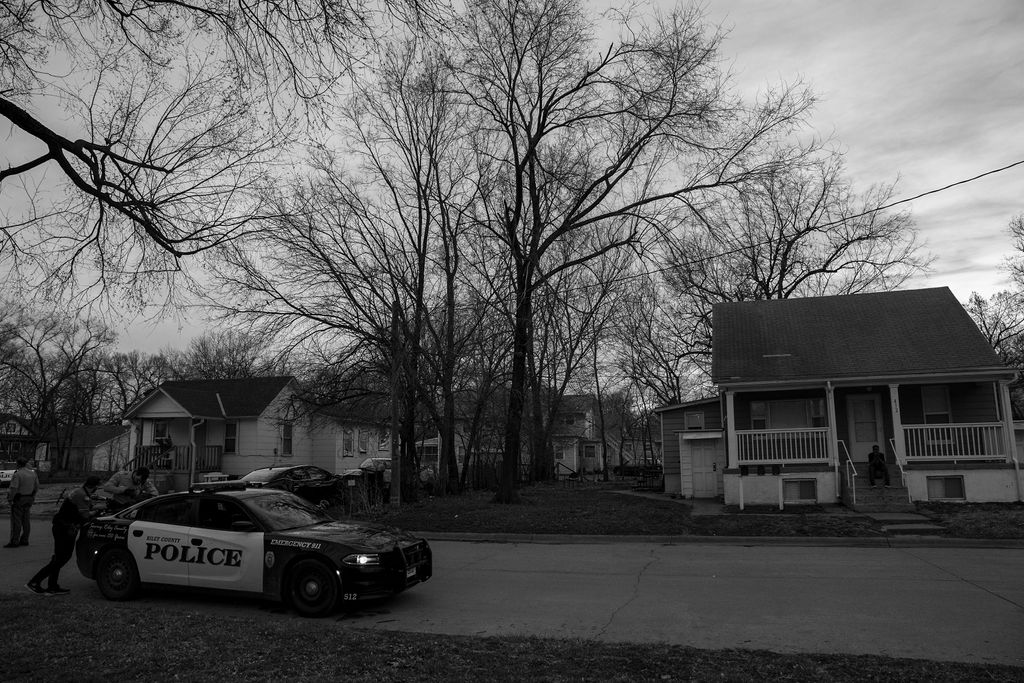 The change we need starts with us. 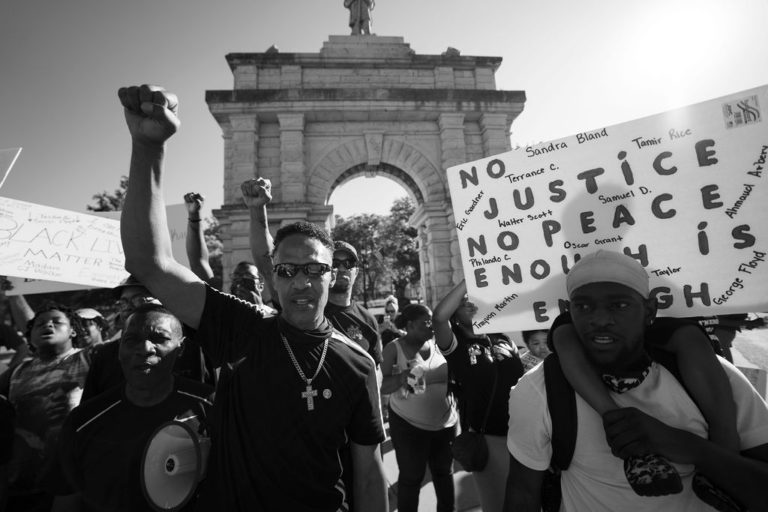 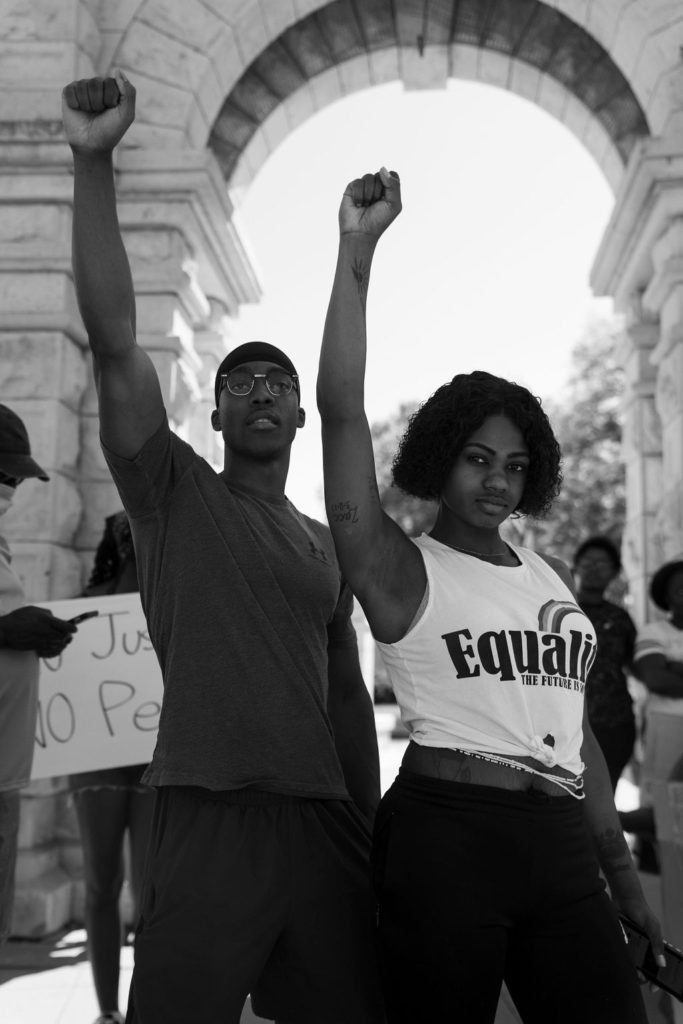 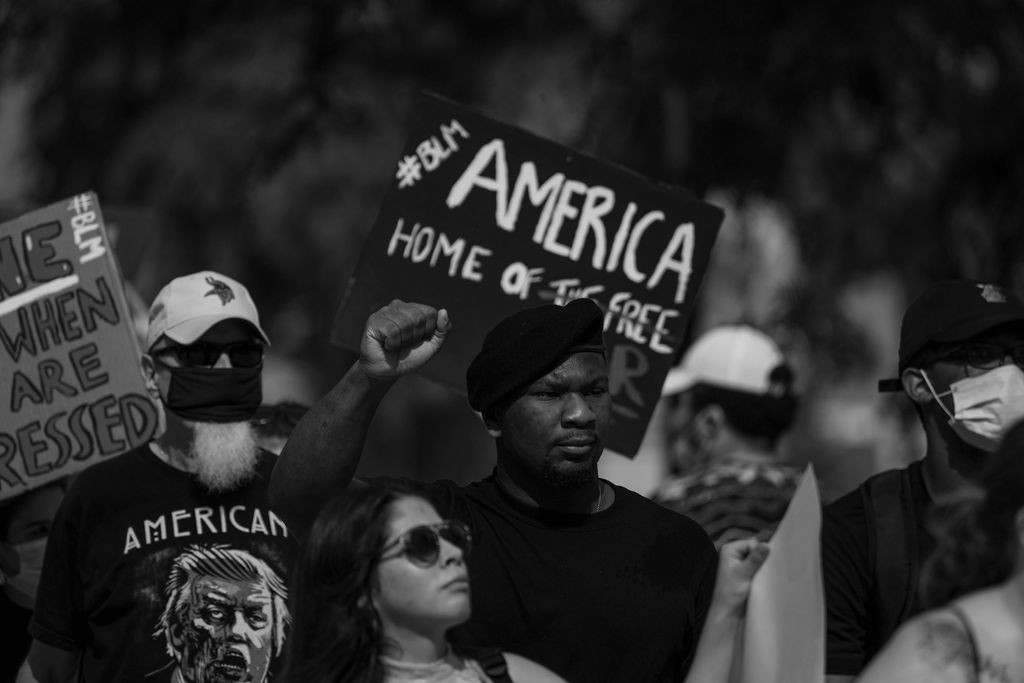 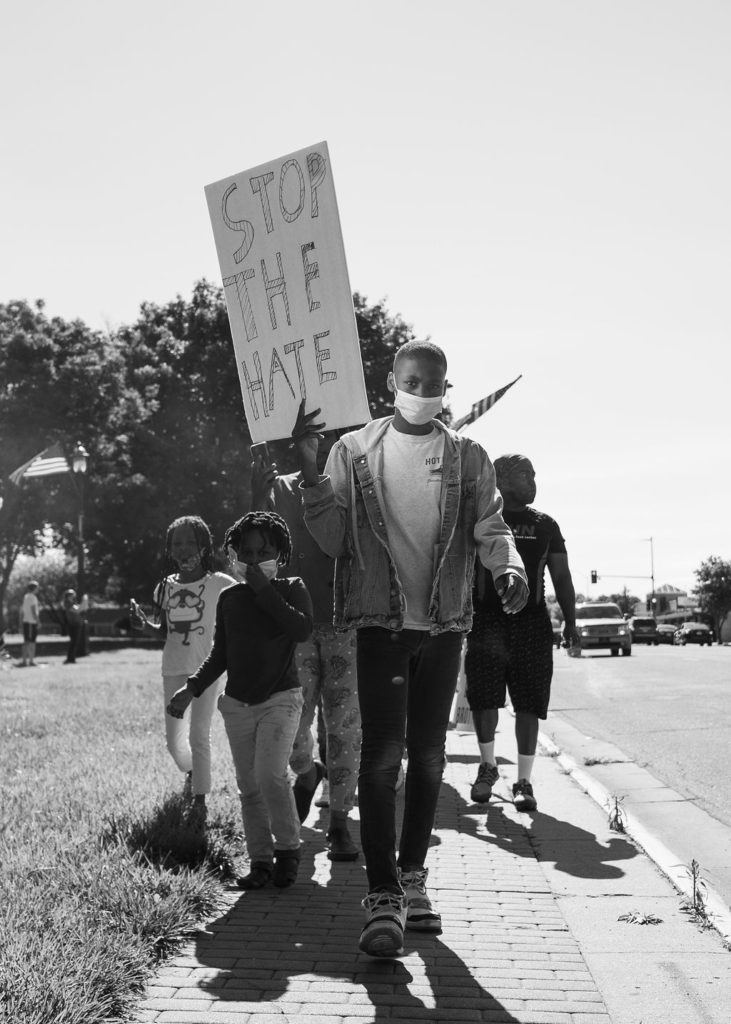 I’m starting a new docuseries on veterans who are homeless and their stories. As veterans, we all have a story, some better than others. This is Leo, who served in the USMC [United States Marine Corp] from 1972 to 1976 as a grunt [infantryman]and was very positive. After getting out, he worked for the city’s Fire Department Engine 19, “best fire department in the city.” He fell through a roof of a structure on fire, leaving him disabled. After seeking help from the union and the VA [Department of Veteran Affairs], he found himself living on the streets. For over a decade and a half, he has been homeless in Chicago. He talked about his service as if he were still in it. At the end of our conversation, I asked him what brought him to Chicago. He winked at me and said, ”Betty,” then looked up to heaven!

Struggle Together, from the series Homeless Veteran Project
2018

Sitting at the crosswalk in a downtown NYC intersection with a wall full of luggage and personal belongings are Todd and Tabitha from Spartanburg, SC. Together have been living on the streets for about one year. Todd was a combat medic 91b. His last duty station was 2nd Infantry Division. His sign read: ‘Homeless and sleeping on the streets. Waiting on Temp housing. Just trying to survive anything is a blessing. 91b combat medic/2-ID FSB. Honorable discharge thank you and god bless.”

Lazone Grays, I want to wish you a Happy 101st Birthday. You survived the Korean War and earned the Bronze Star. I listened to you share your stories as your voice cracked with emotion. From one veteran to another: I’m privileged and honored. You also shared moments that were memorable, one being the first handshake from a white officer when the US Army first integrated. Then you shared the challenges during those times being Black in war while serving this country. What I’ve experienced only through history books, you’ve lived through. Now we can add COVID-19 to the list. As you sit in your favorite chair, you’re witnessing protest across America. I hate that you have to add this to the list of things to witness. When I started the Yuma St. project I had no idea what to expect. Sir, on this day [June 4] I honor you and send you the best on your 101st Birthday.

The community of Junction City, Kansas, came out to protest peacefully. “We want to live” says a protester. The protesters formed in Heritage Park and marched chanting to the police station.

Soldiers Standing with Citizens in Unity, from the series George Floyd Protest
2020

The community of Junction City, Kansas, came out to protest peacefully. “We want to live” says a protester. The protesters formed in Heritage Park and marched chanting to the police station.

We March Together, from the series George Floyd Protest
2020

Black men, black boys are watching. Continue to be examples so that they see what leaders do. The change we need starts with us. Share experiences with others, have conversations. With those who want to understand, share; with those that don’t, we can circle back.

Will the Hate End?, from the series George Floyd Protest
2020

2020: our children, our future kings and queens, are learning what protesting and activism are. As a parent, I never thought I’d see this day.

A Beautiful Marriage, from the series Yuma Street
2020

Mr. Ramon “Ray” Guliford & wife Ms. Billye Cole have been in Manhattan, KS, since 1963 when he came from southern KS for better opportunity. Ray retired from KGAS (Kansas Gas) and was the first African American to have worked there. He recalls a time when Blacks couldn’t cross over Poyntz Ave. I asked them how have they managed to adjust to all the changes that they have seen in their time on Yuma St. They told me that their faith keeps them covered and sustains them! Both went on to praise their church family Manhattan Christian Fellowship Church for continual prayer during COVID-19. During the pandemic they both have followed the news, and they maintained close contact with their distant families. Ray does a weekly inventory of the house supplies and does all the grocery shopping because, he said,” D milk” is his favorite.

A father to these three queens, who during COVID-19 was like many Americans, out of work in the restaurant industry. During our moments together, he takes his daughters out for a bike ride on the sidewalk for some fresh air.

Yesterday I received a message about a meme on travelling south of Poyntz [Avenue], posted in a local Facebook group by a local teacher. South Manhattan has a stigma: of being a place for drugs and poverty — the ghetto. I wasn’t raised in the ghetto, but I know what ghettos are like. Yuma Street is not that. Yuma Street has some of the richest history in Manhattan, Kansas, and I will continue sharing that history. Not being from Kansas, I was informed of this rich history by a colleague, who told me to do my research rather than listen to the rumors. The stories that I will be sharing are from those who call Yuma Street home.

Rather than comment on the lady’s post, which infuriated me all day yesterday, I decided to continue making photographs of the great people south of Manhattan.

I’ve Seen It All, from the series Yuma Street
2020

Mrs. Arlene Cole, a widow: “I can’t hear, I can’t see, I look terrible, but I remember! I’ve lived in Manhattan for 75 years and [have been] living in this house for 73 years.”

Mrs. Cole came to the Little Apple from Ellsworth, Kansas, with her first husband. She goes on to recall that not many Black people lived in Ellsworth during her time growing up. She mentioned going to grade school and being only one of five Black families. She said, “ What was important to me was getting my education and being an educated black woman!” Mrs. Cole said the “mess” —meaning racism — was going on during her time as a child and said it still is going on. She said she only seldom heard the word “nigger” being used in Ellsworth, but when she did hear the word being used, it sent fear and chills through her body. She said that upon graduating high school, she wanted to go to a Black college, so she went to Lincoln University in Missouri. After graduating, she married her first husband, who was in the Army, and that brought her to Manhattan, Kansas. After that marriage didn’t work, she then married Mr. Cole, her second husband. She worked at McCall’s for 19 years and retired just after Mr. Cole died. Mrs. Cole said that to keep busy, she joined a few Black clubs: the Eastern Stars, 20th Century Club, and a Black history club. She spoke about the changes on Yuma Street, on how the historical homes are being taken down and how the younger generation just doesn’t take care of things in the same way. At 94 years old, she is the second oldest woman living on Yuma Street.

I’ve Labored Through My Whole Life, from the series Yuma Street
2020

Zavalas sat on the front porch as the Riley County Police Department made an arrest. He was forced to stay on his porch because the man they arrested was found to have a firearm and other paraphernalia on his person. This was a few hours before the stay-at-home order went into effect.

The Cove Is Where We Survive, from the series Homeless Veteran Project
2019

“We were trained to be invincible. Not only did I earn the title of US Marine I earned the title Pig / Hog in the Pig Pond.” After four tours and being shot three times, Gerald now lives on the streets of Tampa, Florida.  After going through chemotherapy recently, he strives to have as simple of a life as possible. A few days after meeting him, I happened to run across him in my search for other veterans, and he told me that he could introduce me to his other veteran buddies. He told me that they all spent most of the days fishing out of the local cove, where they could fish for free without being bothered. On this day the temp in Florida was about 75 degrees, which the locals told me was pretty chilly. Gerald explained that he would later that day go to the VA [Department of Veterans Affairs] in hopes that he could work with JAG [Judge Advocate General’s Corps].  He said he needed to speak with JAG to help him with his ex-wife, whose current husband felt entitled to his past disability compensation that he was trying to obtain for his prior injuries. Gerald told me that he would be happy to give him whatever he wanted as long as they would allow him to keep enough money to buy new fishing tackle so that he could keep fishing in the cove, which was the primary way he fed himself.